Travel Form, formerly known as the "cheetah", is a druid shapeshifting spell learned at level 18. The form it choose depends on the environment the druid is currently in and whether flying is permitted in that area.

With the release of

Mists of Pandaria, the default cheetah form was replaced by an updated stag form. The old cheetah form can still be acquired through the use of Glyph of the Cheetah.

It is widely speculated[citation needed] that the original intention was for this form to be a stag but was changed at the last minute. This is evidenced through the odd hoof-shaped icon, and the fact that while the other forms (except Tree of Life Form) have unique skins, cheetahs that look identical to travel form exist in the game. 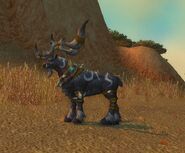 Horde Travel Form
Add a image to this gallery

Retrieved from "https://wowwiki.fandom.com/wiki/Travel_Form?oldid=2837151"
Community content is available under CC-BY-SA unless otherwise noted.