Start a Wiki
watch 01:56
'World of Warcraft: Legion' Feature Preview – Transmogrification
Do you like this video?

Transmogrification is a feature released with Patch 4.3.0[1] that players can access via an ethereal Transmogrifier NPC. It allows players to alter the appearance of their weapons and armor for a fee (in gold).

in range of Transmogrification NPC

out of range of Transmogrification NPC

As part of the

Legion system pre-patch (Patch 7.0.3), significant changes were made to the transmogrification system. Every item in the bank and Void Storage of a character is now added to the player's Collections window under a new tab called "Appearances". In addition, all items from quests completed in the past - even items not chosen for a reward - are included as possible item appearances. The changes also added new appearance slots for shirts, weapon enchants, and tabards.[2]

The following additional changes were made to transmogrification as part of the patch:

Player characters are able to visit one of the Ethereal Transmogrifiers to use the service. Once a player speaks to the NPC, the transmogrification interface will appear. This interface displays the character's item slots on the left, and a collection of all available appearances on the right. Players select the "skin" of the new appearance by clicking on the item slot they want to change (on the left), then selecting the desired appearance from the right. The appearance will be previewed on the character within the interface, before players commit to the change by spending gold.

Players building their garrisons while on Draenor that desire access to Void Storage and transmogrification should consider building a level 3 Storehouse. The Storehouse is classified as a small building.

Additionally, building a level 1 and/or level 2 Dwarven Bunker/War Mill will offer additional transmogrification items. These buildings are classified as large. 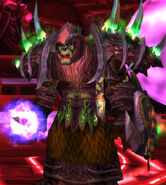 Before using the service. 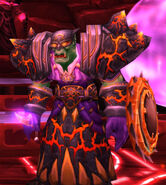 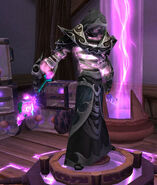 Stormwind Transmogrification NPC
Add a image to this gallery

Legion feature preview - Transmogrification
Add a image to this gallery