The Tol'vir are a race of "stone-like cat people" created by the titans[1] that originate and dwell in the zones of Uldum. They were created to maintain titan repositories and machinery. There was once another society of tol'vir in Northrend, but they were overthrown by the Nerubians and transformed into Obsidian destroyers. It is possible that some of the original Tol'vir in Northrend still exists deep within the remnants of Azjol-Nerub.[2] The tol'vir in Uldum seem to be somehow connected with Al'Akir and his elemental minions.[3]

The entities known as obsidian destroyers are actually enslaved titan constructs that were once called the tol'vir. The tol'vir were created to maintain titan lore repositories and titan machinery surrounding the titan cities of Ulduar and Uldum. Not long after the troll empires divided the insectoid kingdom of the aqir, the aqir that traveled north discovered and overthrew the tol'vir society in Northrend. These aqir would eventually become the race we know as the nerubians today, having adapted the tol'vir's architecture for their own purposes. Similarly, the aqir that traveled south ransacked and overthrew a titan research station near Uldum, renaming themselves the qiraji and calling their new home Ahn'Qiraj. Although the Scourge would eventually consume the nerubian empire and throw its few remaining tol'vir slaves into the front lines, it's possible that more tol'vir still exist in the hidden titan city of Uldum or deep within the remnants of Azjol-Nerub.[4]

The Tol'vir made their first appearance in World of Warcraft: Cataclysm, when Uldum was introduced as an actual zone.

One of the two dungeons in Uldum is the Lost City of Tol'vir.

Ramkahen
The direct, but distant descendants of the Tol'vir that succumbed to the Curse of Flesh.
Neferset
A group of Ramkahen-turned-Tol'vir that sided with Deathwing in exchange for retaining their lost stone bodies.
Orsis

A group of Tol'vir in the Skywall 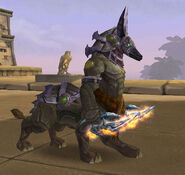 A masked Tol'vir
Add a image to this gallery

Retrieved from "https://wowwiki.fandom.com/wiki/Tol%27vir?oldid=2839164"
Community content is available under CC-BY-SA unless otherwise noted.