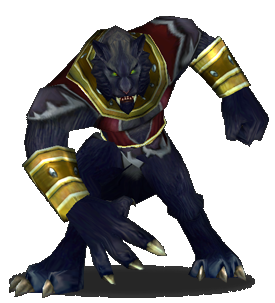 Tigon is an animal-hybrid form troll high priests and prophets can take when drawing power from the great feline loa gods Shirvallah and Bethekk. It is thus not a proper creature race.

Three bosses in-game use this form, two of which are in Zul'Gurub, while the third resides in Karazhan:

If one equips the two fist weapons, [Thekal's Grasp] and [Arlokk's Grasp], to form the Primal Blessing set, it grants a small chance when ranged or melee damage is dealt to infuse the wielder with a blessing from the Primal Gods. Not only does the blessing transform your character into a tigon, but it increases ranged and melee attack power by 300 for 12 seconds.

The name "tigon" is taken from the game files, as no other name is known.

Retrieved from "https://wowwiki.fandom.com/wiki/Tigon?oldid=1985446"
Community content is available under CC-BY-SA unless otherwise noted.