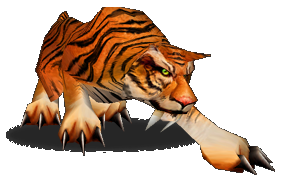 A variety of big cat, tigers are found on the Echo Isles in Durotar they're found all over Pandaria and all over Stranglethorn Vale. Most tigers are orange with black stripes, but there are a few white tigers; the most famous being King Bangalash.

They are territorial and generally solitary but social animals.

These great cats stand more than 3 feet tall at the shoulder and are about 9 feet long. They typically weigh from 400 to 600 pounds.[1]

Spectral tigers are not actually spirits or ghosts. They were created when Draenor exploded, unleashing energies that warped the wild cat's biology.[1]

The last known Zulian tigers were kept by High Priest Thekral, deep within Zul'Gurub. They are said to have been hunted into extinction.[2]

A rare epic mount is the Swift Zulian Tiger, a rare drop from a Zul'Gurub boss.

Retrieved from "https://wowwiki.fandom.com/wiki/Tiger?oldid=2751607"
Community content is available under CC-BY-SA unless otherwise noted.