Emperor of the Mogu, Thunder King

"Lei Shen" redirects here. Were you looking for the raid boss named the

Lei Shen in the Throne of Thunder?

According to Zhi the Harmonious <Caretaker> of the Golden Lotus, the Thunder King was an emperor named Lei Shen and various weapons and armor of the Thunder King were buried in shrines and tombs around the Vale of Eternal Blossoms.[1]

The Thunder King was a tyrannical Mogu warlord who united the Mogu factions at some point in the distant past[2] and became the first emperor of the mogu in Pandaria.[3] The Thunder King rose to power “the mogu way”; namely, by eliminating his rivals one by one.[4]

According to legend, he was able to accomplish this with the help of a mysterious artifact that he found in the depths of a mountain. After his rise to power, he built the Mogu'shan Vaults to contain and protect this secret[4] and converted the surrounding structure into a sort of shrine dedicated to the mogu empire.

A tale of Lei Shen relates that the power he gained to become Thunder King was stolen from Ra-den who he discovered and met in the titan complex that was to become the Mogu'shan Vaults.[5] Lei Shen was already powerful, but Ra-den's power and that of the artifact, the Engine of Nalak'sha, allowed him to reverse the Curse of Flesh for the mogu and create new races.

In time, Lei Shen attracted the attention of Zulathra and the trolls of the Zandalari troll empire (the Empire of Zul). Zulathra proposed an alliance which was eventually agreed upon, but with both parties anticipating future treachery. As their territories expanded, the alliance was fruitful with the trolls expanding the mogu's knowledge of lands outside of Pandaria and the trolls gaining many magics from the mogu. Their cooperative empire lasted for over 3,000 years before a fateful event that shattered much of their armies and killed Lei Shen.

Lei Shen had decided to invade Uldum in southern Kalimdor, at the time a lush jungle, to try to capture the Forge of Origination which was guarded by the tol'vir. First they were offered a place in the empire, but they surprisingly refused, so the invasion was initiated. Unbeknownst to the mogu and trolls, the tol'vir had discovered how to activate the Forge of Origination, whose power could potentially scour all life from Azeroth, but they learned to limit it's scope to just the region of Uldum. Just as the armies invaded, some tol'vir martyrs delayed the armies at the entrance to the Halls of Origination while most of the remaining tol'vir remained inside. The armies were obliterated along with most life in Uldum, turning it into a desert, but destroying the amassed enemy and killing the Thunder King. His body was recovered and entombed in Kun-Lai Summit. 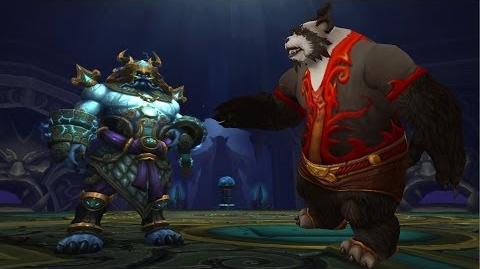 WoW Insider Know Your Lore: Who is the Thunder King? by Matthew Rossi Dec 21st 2012 at 9:00AM
Retrieved from "https://wowwiki.fandom.com/wiki/Thunder_King?oldid=2838140"
Community content is available under CC-BY-SA unless otherwise noted.