Thunder Bluff is the tauren capital city located in the northern part of the region of Mulgore on the continent of Kalimdor. The entire city is built on bluffs several hundred feet above the surrounding landscape, and is accessible by elevators on the southwestern and northeastern sides.

The centaur were driving the tauren out of their homeland around the time of the Third War. When Thrall and his Horde arrived on the continent, an alliance was forged between the Horde and the tauren. Following the defeat of Archimonde and the end of the war, Thrall helped the tauren rout the centaur and reclaim their land. Shortly thereafter the tauren founded the city of Thunder Bluff and began the process of settling into their old surroundings and repairing the ecological damage the centaur had wrought. Thunder Bluff grows and expands at a tremendous rate.[1]

Thunder Bluff was settled fairly recently by the tauren, who successfully drove out the marauding Centaur from their lands. Thunder Bluff is the first city of its kind; for centuries, the tauren wandered the plains as nomads, unable to claim a permanent home. All Horde visitors are welcome here, and the expertise of the tauren in professions ranging from leatherworking to shamanism, druidism to hunting are all practiced and taught here. Unfortunately, the central location of the Thunder Bluff also makes it easily accessible to members of the Alliance. Thus, it is often one of the easier Horde capitals for Alliance players to raid, with Baine being killed long before Horde reinforcements even become an issue.

In order to gain access to Thunder Bluff, visitors must either ride wyverns to the top one of the four towering mesas, use the zeppelin from Orgrimmar or be lifted via rope and wood elevators, an invention unique to the tauren.[2]

Following Cairne’s death in a duel with Warchief Garrosh Hellscream, Thunder Bluff was briefly seized in a coup by Magatha Grimtotem and elements of her tribe. In retaliation, Cairne’s son, Baine, launched a brilliant counterattack using a fleet of zeppelins. After he strategically divided Magatha’s forces, Baine recaptured Thunder Bluff and assumed his role as the high chieftain of the tauren. Having recovered from the recent unrest, the capital is once again a bastion of peace and security for Kalimdor’s tauren.[3]

Although some of the historically nomadic tauren probably miss their itinerant lifestyle, they are intensely proud of their permanent home and spend much of their time trying to make it better. They gladly accept the help of the orcs and trolls that help them, but are somewhat less enthusiastic at the presence of the Forsaken, whom they only grudgingly tolerate because of their membership in the Horde. Tauren place a strong emphasis on the value of life, and the unlife of the Forsaken stands as an affront to their beliefs,[4] not to mention the less than honorable activities the Forsaken carry out.

Thunder Bluff is composed of four towering mesas, or rises. The only entrances from the plains below are elevators leading to the central platform. The central rise is connected to the others through large wooden bridges.

Thunder Bluff is located in the far north of Mulgore, among the sprawling flatlands of the Golden Plains. The weather is almost always warm and sunny, with intermittent breezes carried in from The Barrens.[5] 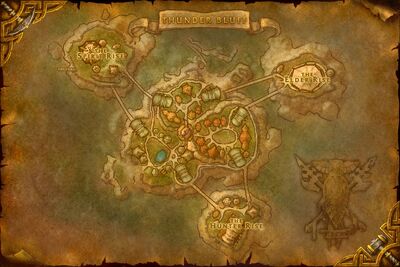 The various rises in Thunder Bluff act a bit like neighborhoods or quarters in a human city [5], or the valleys and keeps of the orcish city Orgrimmar.

The ancient Chief of the Bloodhoof clan, Cairne Bloodhoof has become the High Chieftain of the tauren race. He watches over Thunder Bluff, and over his people in an ever-darkening world. Many believe that he is training his son Baine Bloodhoof, who can be found in Bloodhoof Village, to take Cairne's place one fateful day. Cairne can be found in the Chieftain's Tent in the eastern Main City, and is accompanied by his Honor Guard.

Magatha Grimtotem is the elder crone of the mighty Grimtotem clan. Blessed with shamanic powers when she was just a young girl, Magatha has sought power and prestige nearly her whole life. The Grimtotems believe that Magatha will lead them in eradicating the lesser races from Kalimdor and retaking the tauren ancestral holdings abroad. Magatha constantly spars with Cairne Bloodhoof over the direction of the tauren's future and feels that only she is fit to rule her people.

Hamuul Runetotem is the elder druid of Thunder Bluff, and a childhood friend of Cairne. It remains to be seen where Hamuul will stand in the possible conflict that may arise between his chieftain and Magatha.

So far, very little has changed in Thunder Bluff, although Mulgore has a few noteable changes. 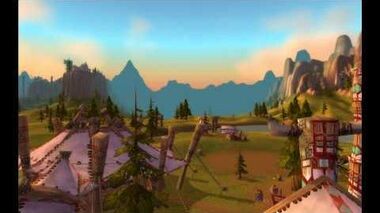 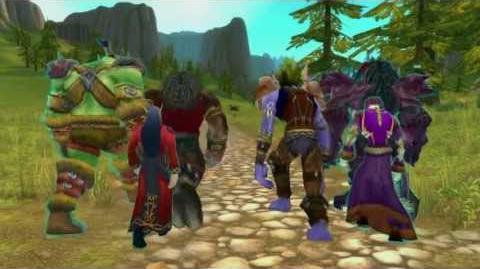 Retrieved from "https://wowwiki.fandom.com/wiki/Thunder_Bluff?oldid=2834347"
Community content is available under CC-BY-SA unless otherwise noted.