For the encounter in Ulduar, see Thorim (tactics).

The Stormlord, Lord of Thunder

[80] The Reckoning; currently in Ulduar

Captured by Loken, held in Ulduar

Thorim is one of the titan watchers. He was betrayed and subdued by his brother Loken as part of a plot to free Yogg-Saron.

Thorim appears in World of Warcraft as part of an extensive quest line in Storm Peaks and as an encounter in Ulduar. Once defeated, he will assist players during the Yogg-Saron encounter.

He is voiced by Jamieson Price.[citation needed]

Thorim served the titans as guardian of Ulduar and the Terrace of the Makers, and protecting the pacts between the races of frost.

After betraying the Pantheon, Thorim's brother Loken tricked him into betraying his frost giant allies by murdering his wife, Sif, and blaming it on the frost giant king. Thorim was enraged, striking out at his allies and then settling into a long stupor.

Many years later, Thorim discovered the truth. With the aid of players serving the Sons of Hodir, Thorim recovered his weapon and his armor, then brought war to his treacherous brother. However, it proved to be an elaborate ruse perpetrated by Loken to lure Thorim away from the Temple of Storms, where proximity to his dark master granted him the power to overcome Thorim's attack. Thorim and his proto-drake, Veranus, were captured and taken to "new dwellings".

Thorim's power is said to have been invoked once, and that it turned a whole continent into dust.

Loken had Thorim taken to Ulduar along with his proto-drake, Veranus (transformed into the plated monstrosity Razorscale), where he was corrupted and brought under the sway of Yogg-Saron. Defeating him in Ulduar breaks Yogg-Saron's spell, and Thorim agrees to aid the adventurers who freed him during the final battle against Yogg-Saron.

His name, title, and location are references to the Norse god Thor. Thorim's hammer (Krolmir) is based on Thor's hammer (Mjolnir) and Thor's wife is also named Sif. During the encounter in Ulduar, a Jormungar Behemoth stands in the arena, probably as a reference to Thor's killer at Ragnarok: The Jörmungandr (whom Thor would slay as well). From the similarity between his name and the metal Thorium there may be some mysterious connection between the two, much in the same way Saronite is considered to have a mystical connection with the Old God Yogg-Saron. However since Thorium is a real metal it may be more doubtful that the designers had any intent to link the two. Loken is also a rewording of Loki, Norse God of Mischief.

Thorim in the Ulduar trailer. 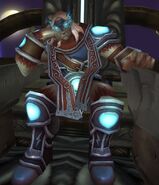 [80] The Reckoning.
Add a image to this gallery

Retrieved from "https://wowwiki.fandom.com/wiki/Thorim?oldid=2817456"
Community content is available under CC-BY-SA unless otherwise noted.