Start a Wiki
Therazane's Throne[56.9, 13.3] is located in the upper shelf of Deepholm, northeast of the Pale Roost and northwest of the Halcyon Egress. It is the seat of Therazane the Stonemother, ruler of Deepholm and mother to the Stone Lords.

After achieving Honored status with Therazane, the throne is occupied with various earth elementals; others are added as players progress further.

Upon first entering the Throne via quests, players are treated to a conversation Therazane is having with her Stone Lords, most of whom are arguing that she trust the "fleshling champion".

Therazane says: They slaughtered stone troggs, Gorik? This is supposed to sway me? It is not much of a feat.

Felsen the Enduring says: I've not spoken with the strangers, but I bore witness to their champion treading into the Crumbling Depths and returning unscathed. It is clearly capable.

Terrath the Steady says: This champion also faced the Stone Dragons and their Broodmother with no glimpse of fear or hesitation. I've seen the most hardy of giants falter where the fleshlings did not.

Therazane says: What of you Boden? What do you see in this "champion?"

Boden the Imposing says: It's not bravery that drives it. It strode before me like it thought this place its home. It is a fool. It will surely get itself killed soon enough.

Therazane says: That very well may be. Even fools have uses though. I keep you around after all.

One of two entries into the Throne. 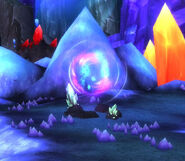 The portal to the Temple of Earth, available after The Binding.
Add a image to this gallery

Retrieved from "https://wowwiki.fandom.com/wiki/Therazane%27s_Throne?oldid=2519003"
Community content is available under CC-BY-SA unless otherwise noted.