"The World Tree and the Emerald Dream" is a section of the History of Warcraft, Chapter I.

The World Tree and the Emerald Dream

For many years, the night elves worked tirelessly to rebuild what they could of their ancient homeland. Leaving their broken temples and roads to be overgrown, they constructed their new homes amidst the verdant trees and shadowed hills at Hyjal's base. In time, the dragons that had survived the Great Sundering came forth from their secret abodes.

Alexstrasza the red, Ysera the green, and Nozdormu the bronze descended upon the druids' tranquil glades and surveyed the fruits of the night elves' labors. Malfurion, who had become an arch-druid of immense power, greeted the mighty dragons and told them about the creation of the new Well of Eternity. The great dragons were alarmed to hear the dark news and speculated that as long as the Well remained, the Legion might one day return and assault the world once again. Malfurion and the three dragons made a pact to keep the Well safe and ensure that the agents of the Burning Legion would never find their way back into the world.

Alexstrasza, the Lifebinder, placed a single, enchanted acorn within the heart of the Well of Eternity. The acorn, activated by the potent, magical waters, sprung to life as a colossal tree. The mighty tree's roots grew from the Well's waters, and its verdant canopy seemed to scrape the roof of the sky. The immense tree would be an everlasting symbol of the night elves' bond with nature, and its life-giving energies would extend out to heal the rest of the world over time. The night elves' gave their World Tree the new name Nordrassil, which meant "crown of the heavens" in their native tongue.

Nozdormu, the Timeless, placed an enchantment upon the World Tree to ensure that as long as the colossal tree stood, the night elves would never age or fall prey to sickness or disease.

Ysera, the Dreamer, also placed an enchantment upon the World Tree by linking it to her own realm, the ethereal dimension known as the Emerald Dream. The Emerald Dream, a vast, ever-changing spirit world, existed outside the boundaries of the physical world. From the Dream, Ysera regulated the ebb and flow of nature and the evolutionary path of the world itself. The night elf druids, including Malfurion himself, were bound to the Dream through the World Tree. As part of the mystical pact, the druids agreed to sleep for centuries at a time so that their spirits could roam the infinite paths of Ysera's Dreamways. Though the druids were grieved at the prospect of losing so many years of their lives to hibernation, they selflessly agreed to uphold their bargain with Ysera. 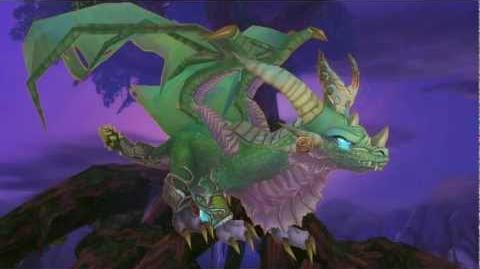 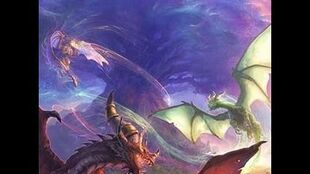 WoW Official Game Site (US) Chapter I: Mythos - The World Tree and the Emerald Dream

Retrieved from "https://wowwiki.fandom.com/wiki/The_World_Tree_and_the_Emerald_Dream?oldid=2761529"
Community content is available under CC-BY-SA unless otherwise noted.