"The Sundering of the World" is a section of the History of Warcraft, Chapter I.

The Sundering of the World

Knowing that the Well's destruction would prevent him from ever wielding magic again, Illidan selfishly abandoned the group and set out to warn the Highborne of Malfurion's plan. Due to the insanity brought on by his addiction and the stinging resentment towards his brother's affair with Tyrande, Illidan felt no remorse at betraying Malfurion and siding with Azshara and her ilk. Above all else, Illidan vowed to protect the Well's power by any means necessary.

Heartbroken by his brother's departure, Malfurion led his companions into the heart of Azshara's temple. Yet as they stormed into the main audience chamber, they found the Highborne in the midst of their final dark incantation. The communal spell created an unstable vortex of power within the Well's turbulent depths. As Sargeras' ominous shadow drew ever closer to the surface, Malfurion and his allies rushed to attack.

Azshara, having received Illidan's warning, was more than prepared for them. Nearly all of Malfurion's followers fell before the mad queen's powers. Tyrande, attempting to attack Azshara from behind, was caught off-guard by the queen's Highborne guardsmen. Though she vanquished the guardsmen, Tyrande suffered grievous wounds at their hands. When Malfurion saw his love fall, he went into a murderous rage and resolved to end Azshara's life.

As the battle raged inside and outside of the temple, Illidan appeared from the shadows near the shores of the great Well. Producing a set of specially crafted vials, Illidan knelt and filled each with the Well's shimmering waters. Convinced that the demons would crush the night elves' civilization, he planned to steal the sacred waters and keep their energies for himself.

The ensuing battle between Malfurion and Azshara threw the Highborne's carefully crafted spellwork into chaos. The unstable vortex within the Well's depths exploded and ignited a catastrophic chain of events that would sunder the world forever. The massive explosion rocked the temple to its foundations and sent massive quakes ripping through the tortured earth. As the horrific battle between the Legion and the night elves' allies raged around and above the ruined capital city, the surging Well of Eternity buckled in upon itself and collapsed.

The resultant catastrophic explosion shattered the earth and blotted out the skies.

As the aftershocks from the Well's implosion rattled the bones of the world, the seas rushed in to fill the gaping wound left in the earth. Nearly eighty percent of Kalimdor's landmass had been blasted apart, leaving only a handful of separate continents surrounding the new, raging sea. At the center of the new sea, where the Well of Eternity once stood, was a tumultuous storm of tidal fury and chaotic energies. This terrible scar, known as the Maelstrom, would never cease its furious spinning. It would remain a constant reminder of the terrible catastrophe... and the utopian era that had been lost forever.

Somehow, against all odds, Queen Azshara and her Highborne elite managed to survive the ordeal. Tortured and twisted by the powers they had released, Azshara and her followers were dragged down beneath the raging sea by the Well's implosion. Cursed - transformed - they took on new shapes and became the hateful serpentine naga. Azshara herself expanded with hate and rage, becoming a massive monstrosity, reflecting the wickedness and malice that had always hidden within her core. 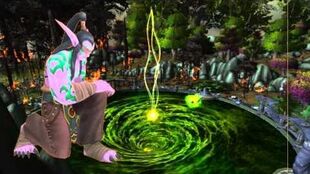 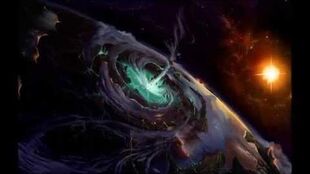 WoW Official Game Site (US) Chapter I: Mythos - The Sundering of the World

WoW Official Game Site (EU) Chapter I: Mythos - The Sundering of the World

Retrieved from "https://wowwiki.fandom.com/wiki/The_Sundering_of_the_World?oldid=2786624"
Community content is available under CC-BY-SA unless otherwise noted.