See The Shattering for other uses of the phrase.

The Shattering: Prelude to Cataclysm

In an excerpt released, Thrall is forced to threaten and dominate unruly elemental manifestations of the Spirit of Fire to prevent them from harming his people and their settlements. He laments the need to resort to such methods, and contemplates what could be behind the disturbing trend of rebellious and uncooperative elements.[3]

Thrall, wise shaman and the warchief of the Horde, has sensed a disturbing change...

Long ago, Azeroth's destructive native elementals raged across the world until the benevolent titans imprisoned them within the Elemental Plane. Despite the titans' intervention, many elementals have ended up back on Azeroth. Over the ages, shaman like Thrall have communed with these spirits and, through patience and dedication, learned to soothe roaring infernos, bring rain to sun-scorched lands, and otherwise temper the elementals' ruinous influence on the world of Azeroth.

Now Thrall has discovered that the elementals no longer heed the shaman's call. The link shared with these spirits has grown thin and frayed, as if Azeroth itself were under great duress. While Thrall seeks answers to what ails the confused elements, he also wrestles with the orcs' precarious future as his people face dwindling supplies and growing hostility with their night elf neighbors.

Meanwhile, Varian Wrynn of Stormwind is considering violent action in response to mounting tensions between the Alliance and the Horde, a hard-line approach that threatens to alienate those closest to him, including his son, Anduin. The conflicted young prince has set out to find his own path, but in doing so, he risks becoming entangled in political instability that is setting the world on edge.

The fate of Azeroth's great races is shrouded in a fog of uncertainty, and the erratic behavior of the elemental spirits, troubling though it is, may only be the first ominous warning sign of the cataclysm to come.[4]

Note: These characters were only mentioned or had little to no role during the story

The story begins with Drek'Thar having a nightmare (which eventually becomes true) that the world is suffering a great cataclysm. The nightmare also has the sentence "The land will sweep, and the world will break. Drek'Thar is starting to show signs of his age, so Palkar isn't as trusting in the elder orc's visions as he once was. Afterwards we meet Cairne Bloodhoof, who is leading a small expedition who is going to help the Horde Expedition back home from their war against the Lich King. Only a few, including Varok Saurfang, who is tired of Garrosh Hellscream, remain in Northrend. After they have packed up and a battle against a group of Kvaldir, the Horde returns to Orgrimmar. However, all is not well in Orgrimmar. Thrall is starting to feel that he isn't the kind of Warchief that the Horde wants, and that he should give his position to someone else. Worse yet, the elements seem to suffer, and Thrall grudgingly uses the harsh method to end the fire attacking Orgrimmmar.

Meanwhile, in Stormwind, some problems are rising too. Varian Wrynn starts feeling that his son is not so fit for battle, and decides that he must go to Ironforge and get hospitality by Magni bronzebeard, king of Ironforge. Jaina is a bit against the way Varian is towards Anduin, and has also took him to Theramore with herself some times. But in Ironforge, Anduin is greeted warmly by Magni, who seems overjoyed to have Anduin visiting him. He gets a lot of battle training, riding trips, and also practices his skills as a priest.

As the situation in Orgrimmar grows more and more intense, Thrall decides to visit Nagrand once again to seek help from his greatmother Geyah. As Thrall leaves, he grudgingly makes Garrosh leader for a time, only because he couldn't choose Saurfang the Younger, since he is dead, and both Eitrigg, Cairne and Varok are too old. However, Cairne is fiercely against it, and says that Garrosh will ruin all that he and Thrall had made it into. But Thrall doesn't change his mind, and chooses to leave with the decision unchanged. Cairne goes to his old friend, Hamuul Runetotem, to seek advice about how to handle the situation. Hamuul is also against Thrall's decision, but they decide to let it be so.

In Ironforge, Anduin also befriends other dwarves, such as Aerin and Rohan, who are both priests, and they teach the young prince a lot in the ways of a priest. However, in a visit to Kharanos, an earthquake erupts, and Aerin gets killed by the shattered rocks. Magni receives some ancient tablets from ulduar by his younger brother Brann, to try communicate with the elements and find out what has disturbed them. However, it doesn't go well, and Magni gets transformed into diamond during the ritual. Many leaders and representatives from both the Horde and Alliance come to witness what had happened.

In Nagrand, Thrall once again meets his grandmother, though he gets another teacher, one named Aggra. Aggra seems to dislike Thrall for keeping the name Blackmoore gave him, and does little to hide it. In the beginning, it doesn't turn out well, but Aggra begins to gain more respect for Thrall. After some long tutoring and guidance, Thrall prepares himself for a true vision quest to see what a true shaman is. He witnesses all the four elements and what emotion they represents. However, none of them are able to help, except for the stone element, who sees the stone Thrall gives him from Azeroth.

Meanwhile in Ashenvale, Hamuul and the other night elf druids gather for a peace ritual, but are disrupted when a group of orcs attack them all and kill every single one of them, except for Hamuul, who gets buried in the sand. When he digs himself up, he believes the orc to be sent by Garrosh. However, the orc says he's a member from the Twilight's Hammer. But Hamuul remains unconvinced, and tells Cairne about what had happened. Furiously, Cairne challenges Garrosh to a Mak'gora, and Garrosh accepts. But what Cairne doesn't know is that Magatha had deceived Garrosh by saying that she would give him a blessing to Gorehowl, which in truth was a poison to kill Cairne quickly. In the arena, Cairne seems to gain the upper hand: But Garrosh suddenly manages to shatter the Runespear. Cairne, surprisingly weakened, tries to stab Garrosh. Only too late does he realize exactly what had happened: Magatha was behind it all. He watches mutely as Garrosh cuts his throat with Gorehowl.

After Cairne's death, Magatha and the Grimtotems hurry to Thunder Bluff and slaughter every single sleeping person in the city, while a few escapes. They also manage to take Freewind Post, Camp Taurajo, Sun Rock Retreat and camp Mojache. But one of the grimtotems, named Jevan, gets sick of Magatha's ways, and saves Baine, Cairne's son, from death and helps him get to safety.

Things also look grim in Ironforge. After Magni's death, Moira has returned to claim the throne and keeps all transport sealed, and all magi held hostage. Anduin longs for home, but Moira and her Dark Iron Dwarves keep him on a short leash. However, he remembers the hearthstone Jaina had given him, and uses it to transport himself to Theramore, and he brings the weapon Magni had given him with him. Sadly, his timing isn't good, as he arrives just as Baine has come too, seeking refugee from the Grimtotems. At first, tensions are high, but eventually they grow to respect each other. Baine and Anduin tell each other of the tragedies that have happened. Then Anduin manages to get a message through to Stormwind.

In Alterac Valley, messengers come and inform the Frostwolf clan of Cairne's demise. Drek'Thar realizes that his earlier nightmare was true and Palkar regains his respect for Drek'Thar. Baine and Jevan Grimtotem ask Gazlowe to help them build weapons, since they plan to attack Thunder Bluff and punish Magatha. But Baine is not the only one furious. Garrosh feels ashamed about what had happened, and had sent Magatha a death threat after Eitrigg told him about the poison on Gorehowl. Eventually, Baine is victorious and Thunder Bluff retaken.

After Thrall is finished with his training, he is prepared to leave Nagrand again and return, but Geyah informs him of the grim news concerning Cairne. Thrall returns to mourn his old friend's death, and is feeling guilt that their last conversation has ended in a disaster.

Meanwhile, in Stormwind, Varian is furious at what Moira had done to his son, and gathers the SI:7 agency to help him assasinate the Dark Iron dwarves. Meanwhile, Anduin realizes that Varian is gonna kill Moira, something that Anduin feels is wrong. He returns to Ironforge, much to the dismay of Jaina Proudmoore, to stop Varian from killing Moria. Varian already had stormed Moria's room and held his blade at her throat but decides to give her a last chance. Varian decides that she needs guidance, so he convinces Muradin Bronzebeard and Falstad Wildhammer to, along with Moira, form the Council of Three Hammers.

The text ends with Thrall and Aggra ready to sail off to the Maelstrom. 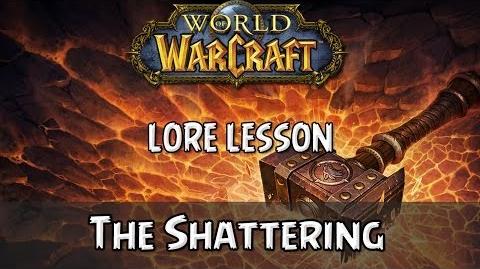 BlizzPlanet World of WarCraft: The Shattering Novel By Medievaldragon – July 4, 2010

Retrieved from "https://wowwiki.fandom.com/wiki/The_Shattering:_Prelude_to_Cataclysm?oldid=2835581"
Community content is available under CC-BY-SA unless otherwise noted.