"The Founding of Quel'Thalas" is a section of the History of Warcraft, Chapter II. It is set 6,800 years before Warcraft: Orcs & Humans.

The Founding of Quel'Thalas

The high elves, led by Dath'Remar, left Kalimdor behind them and challenged the storms of the Maelstrom. Their fleets wandered the wreckage of the world for many long years, and they discovered mysteries and lost kingdoms along their sojourn. Dath'Remar, who had taken the name Sunstrider (or "he who walks the day"), sought out places of considerable ley power upon which to build a new homeland for his people.

As the high elves crossed the rugged, mountainous lands of Lordaeron, their journey became more perilous. Since they were effectively cut off from the life-giving energies of the Well of Eternity, many of them fell ill from the frigid climate or died from starvation. The most disconcerting change, however, was the fact that they were no longer immortal or immune to the elements. They also shrank somewhat in height, and their skin lost its characteristic violet hue. Despite their hardships, they encountered many wondrous creatures that had never been seen in Kalimdor. They also found tribes of primitive humans who hunted throughout the ancient forestlands. However, the direst threat they encountered were the voracious and cunning forest trolls of Zul'Aman.

These moss-skinned trolls could regenerate lost limbs and heal grievous physical injuries, but they proved to be a barbaric, evil race. The Amani empire stretched across most of northern Lordaeron, and the trolls fought hard to keep unwanted strangers from their borders. The elves developed a deep loathing for the vicious trolls and killed them on sight whenever they were encountered.

After many long years, the high elves finally found a land which was reminiscent of Kalimdor. Deep within the northern forests of the continent, they founded the kingdom of Quel'Thalas and vowed to create a mighty empire which would dwarf that of their Kaldorei cousins. Unfortunately they soon learned that Quel'Thalas was founded upon an ancient troll city that the trolls still held to be sacred. Almost immediately, the trolls began to attack the elven settlements en masse.

The stubborn elves, unwilling to give up their new land, utilized the magics which they had gleaned from the Well of Eternity and kept the savage trolls at bay. Under Dath'Remar's leadership, they were able to defeat the Amani warbands that outnumbered them ten to one. Some elves, wary of the Kaldorei's ancient warnings, felt that their use of magic might possibly draw the attention of the banished Burning Legion. Therefore, they decided to mask their lands within a protective barrier which would still allow them to work their enchantments. They constructed a series of monolithic Runestones at various points around Quel'Thalas which marked the boundaries of the magic barrier. The Runestones not only masked the elves' magic from extra-dimensional threats, but helped to frighten away the superstitious troll warbands as well.

As time wore on, Quel'Thalas became a shining monument to the high elves' efforts and magical prowess. Its beauteous palaces were crafted in the same architectural style as the ancient halls of Kalimdor, yet they were interwoven with the natural topography of the land. Quel'Thalas had become the shining jewel that the elves had longed to create. The Convocation of Silvermoon was founded as the ruling power over Quel'Thalas, though the Sunstrider Dynasty maintained a modicum of political power. Comprised of seven of the greatest high elf lords, the Convocation worked to secure the safety of the elven lands and people. Surrounded by their protective barrier, the high elves remained unmoved by the old warnings of the Kaldorei and continued to use magic flagrantly in almost all aspects of their lives.

For nearly four thousand years the high elves lived peacefully within the secluded safety of their kingdom. Nevertheless, the vindictive trolls were not so easily defeated. They plotted and schemed in the depths of the forests and waited for the numbers of their warbands to grow. Finally, a mighty troll army charged out from the shadowy forests and once again laid siege to the shining spires of Quel'Thalas. 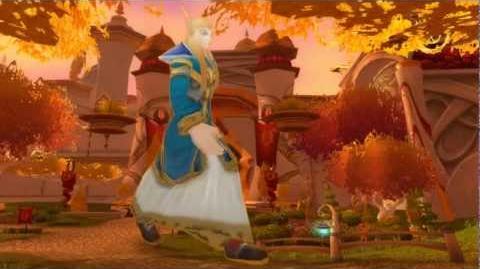 Retrieved from "https://wowwiki.fandom.com/wiki/The_Founding_of_Quel%27Thalas?oldid=2839127"
Community content is available under CC-BY-SA unless otherwise noted.