The deep-dwelling dwarves of Blackrock Mountain employ a forge constructed directly into a river of molten lava, the only place they could find that could generate the required amount of consistent heat.

There are also rumors that a similar forge exists in the heart of the Elemental Plane, where dark iron is much more common. A journey to this site would not be for the faint of heart.[1] (MM&M #?)

The Black Forge (related to "The Black Anvil") is the only location in World of Warcraft in Azeroth where Dark Iron ore can be smelted into Dark Iron Bars, which are used in several Blacksmithing and Engineering recipes. Eight dark iron ore are required to smelt one dark iron bar. The Black Forge is also the only place where one can make the Smoking Heart of the Mountain, an enchanting recipe (requires enchanting 265 to make).

The forge is located just before the bridge leading into the main Molten Core entrance and just after the Summoners' Tomb. Upon exiting the room of the Seven, turn right, and then immediately left - there will be a small bridge leading to a single Fireguard Destroyer. The Forge is directly behind it.

[60] Attunement to the Core - Solo Attunement, or the Molten Bridge on how to reach this forge by yourself. High fire resistance gear is recommended. Most of this distance can be skipped by using [Direbrew's Remote] from the Brewfest seasonal event to reach the Grim Guzzler and dropping down into the lava outside the back door. Note that the forge is not a subzone of Blackrock Depths, it exists only as a static object in the Molten Bridge subzone.

Blackrock Depths has been partially redone, so you don't need Direbrew's Remote to get there more quickly, but a negative change is that using Lothos Riftwaker to teleport into Molten Core (assuming you are attuned) will not allow you to get to the Black Forge, because leaving the instance will teleport you back to Lothos. 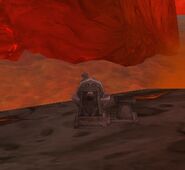 Retrieved from "https://wowwiki.fandom.com/wiki/The_Black_Forge?oldid=2836644"
Community content is available under CC-BY-SA unless otherwise noted.