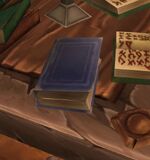 Lord Lothar rallied the remnants of Stormwind's armies after their defeat at Stormwind Keep, and then launched a massive exodus across the sea to the northern kingdom of Lordaeron. Convinced that the Horde would overcome all of humanity if left unchecked, the leaders of the seven human nations met and agreed to unite in what would become known as the Alliance of Lordaeron. For the first time in nearly three thousand years, the disparate nations of Arathor were once again united under a common banner. Appointed as Supreme Commander of the Alliance forces, Lord Lothar prepared his armies for the coming of the Horde.

Aided by his lieutenants, Uther the Lightbringer, Admiral Daelin Proudmoore, and Turalyon, Lothar was able to convince Lordaeron's demi-human races of the impending threat as well. The Alliance succeeded in gaining the support of the stoic dwarves of Ironforge and a small number of high elves of Quel'Thalas. The elves, led at that time by Anasterian Sunstrider, were largely uninterested in the coming conflict. However, they were duty-bound to aid Lothar because he was the last descendent of the Arathi bloodline, which had aided the elves in ages past.

The Horde, now led by Warchief Doomhammer, brought in ogres from its homeworld of Draenor and conscripted the disenfranchised Amani forest trolls into its fold. Setting out on a massive campaign to overrun the dwarf kingdom of Khaz Modan and the southern reaches of Lordaeron, the Horde effortlessly decimated all opposition.

The epic battles of the Second War ranged from large-scale naval skirmishes to massive aerial dogfights. Somehow the Horde had unearthed a powerful artifact known as the Demon Soul and used it to enslave the ancient Dragonqueen, Alexstrasza. Threatening to destroy her precious eggs, the Horde forced Alexstrasza to send her grown children to war. The noble red dragons were forced to fight for the Horde, and fight they did.

The war raged across the continents of Khaz Modan, Lordaeron, and Azeroth itself. As part of its northern campaign, the Horde succeeded in burning down the borderlands of Quel'Thalas, thereby ensuring the elves' final commitment to the Alliance's cause. The greater cities and townships of Lordaeron were razed and devastated by the conflict. Despite the absence of reinforcements and overwhelming odds, Lothar and his allies succeeded in holding their enemies at bay.

However, during the final days of the Second War, as the Horde's victory over the Alliance seemed almost assured, a terrible feud erupted between the two most powerful orcs on Azeroth. As Doomhammer prepared his final assault against the Capital City of Lordaeron - an assault that would have crushed the last remnants of the Alliance - Gul'dan and his followers abandoned their posts and set out to sea. The bewildered Doomhammer, having lost nearly half of his standing forces to Gul'dan's treachery, was forced to pull back and forsake his greatest chance at victory over the Alliance.

The power-hungry Gul'dan, obsessed with obtaining godhood itself, set out on a desperate search for the undersea Tomb of Sargeras that he believed held the secrets of ultimate power. Having already doomed his fellow orcs to become the slaves of the Burning Legion, Gul'dan thought nothing of his supposed duty to Doomhammer. Backed by the Stormreaver and Twilight's Hammer clans, Gul'dan succeeded in raising the Tomb of Sargeras from the sea floor. However, when he opened the ancient, flooded vault, he found only crazed demons awaiting him.

Seeking to punish the wayward orcs for their costly betrayal, Doomhammer sent his forces to kill Gul'dan and bring the renegades back into the fold. For his recklessness, Gul'dan was torn apart by the maddened demons he had set loose. With their leader dead, the renegade clans quickly fell before Doomhammer's enraged legions. Though the rebellion had been quelled, the Horde was unable to recoup the terrible losses it had suffered. Gul'dan's betrayal had afforded the Alliance not only hope, but also time to regroup and retaliate.

Lord Lothar, seeing that the Horde was fracturing from within, gathered the last of his forces and pushed Doomhammer south, back into the shattered heartland of Stormwind. There, the Alliance forces trapped the retreating Horde within the volcanic fortress of Blackrock Spire. Though Lord Lothar fell in battle at the Spire's base, his lieutenant, Turalyon, rallied the Alliance forces at the eleventh hour and drove the Horde back into the abysmal Swamp of Sorrows. Turalyon's forces succeeded in destroying the Dark Portal, the mystical gateway that connected the orcs to their homeworld of Draenor. Cut off from its reinforcements and fractured by infighting, the Horde finally buckled in upon itself and fell before the might of the Alliance.

The scattered orc clans were quickly rounded up and placed within guarded internment camps. Though it seemed that the Horde had been defeated for good, some remained highly skeptical that peace would last. Khadgar, now an Archmage of some renown, convinced the Alliance high command to build the fortress of Nethergarde that would watch over the ruins of the Dark Portal and ensure that there would be no further invasions from Draenor.

"The Alliance of Lordaeron" is a section of the History of Warcraft, Chapter IV. It is set during the timeframe of Warcraft II: Tides of Darkness.

The book The History of the Alliance of Lordaeron was one of the many military history books that Thrall studied while training as a gladiator for Aedelas Blackmoore.[1]

Retrieved from "https://wowwiki.fandom.com/wiki/The_Alliance_of_Lordaeron?oldid=2839136"
Community content is available under CC-BY-SA unless otherwise noted.