Thassarian was the first death knight to rejoin the Alliance. He was first encountered in Acherus: The Ebon Hold as a level 55 standing next to Orbaz Bloodbane and Koltira Deathweaver. In phase two after completing

Thassarian can later be found aboard the Alliance airship Skybreaker above the skies of Icecrown. He is involved in quests that unfold The Shadow Vault among others. He also plays a part in the unfolding storyline of the Wrath of The Lich King. 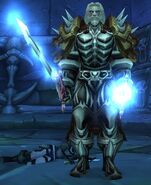 Thassarian and Lurid onboard The Skybreaker.
Add a image to this gallery

Even while he was in service of the Lich King, Thassarian seemed to be a noble person. After sending the player to rescue Koltira Deathweaver — against the code of the Scourge death knight — Orbaz Bloodbane asked why he cared, also insinuating his dislike of Koltira as he was a blood elf. Thassarian replied that, though they may have been hated enemies in life, "In death, we are brothers."

He appears to dual wield the Two-Handed Sword, Endbringer.

Warcraft: Death Knight, a new manga from TokyoPop, will reveal the untold story of Thassarian. The manga is due for release in December 2009. [1]

To Tanathal: Speak, Lich! Undeath won't save you from what I'll put you through!

All I ever wished was to serve my king once again. For humanity, against a common enemy. Instead, I find that our numbers have been infiltrated by cultist scum.... and all of the signs point to Naxxanar as the origin of this rot.

Retrieved from "https://wowwiki.fandom.com/wiki/Thassarian?oldid=2114812"
Community content is available under CC-BY-SA unless otherwise noted.