A test realm or test server is a realm made for trying out features in development for the next patch. Blizzard usually calls it a "Public Test Realm" or "PTR" for players of World of Warcraft to test features. Blizzard has also recently done a "Tournament Test Realm" or "TTR" to get ready for the Arena Competition.

You can make a character on the test realm from a copy of one of your characters on a normal realm or from a premade. Whether there will be premades or not will be clearly announced. Players on test realms should not be surprised by character wipes, item wipes, or frequent downtime to make changes or apply patches, so don't get too attached to your character on these servers. 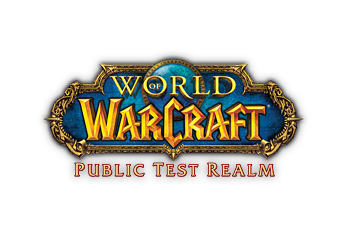 Just prior to the World of Warcraft: Cataclysm release, Blizzard switched the official site over to Battle.net and broke many, many links. This may make using the PTRs difficult. One side-effect is that there now appears to be no standard link for PTR patch notes. Check the Patches page for the latest PTR patch notes.

As of Patch 4.2 on Mac OS X only, the PTR had its own launcher called "World of Warcraft LauncherB" that gets called from the regular launcher. Subsequent PTR builds appear to have removed this strange extra launcher.

As of build 15581, a preliminary version of the pre-release systems patch for

Mists of Pandaria was made available on the PTR. At this point, World of Warcraft accounts with a

The first pre-patch build that appeared on the PTR was build 26838. As of build 26871, pre-patch PTR build and Beta appear to be basically the same client.

Official Support > PTR Discussion forum (US) Access to 5.0.4PTR and Mists of Pandaria Beta by

MMO-Champion Access to 5.0.1 PTR and Mists of Pandaria Beta by Boubouille 2012-07-03 04:08 PM
Retrieved from "https://wowwiki.fandom.com/wiki/Test_realm?oldid=2851418"
Community content is available under CC-BY-SA unless otherwise noted.