Players complete his quests to further gain the trust of the Stone Lords, and ultimately to recover one of the fragments of the World Pillar. 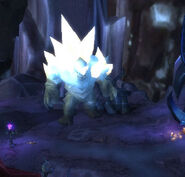 Terrath battling cultists at the Precipice.
Add a image to this gallery

Retrieved from "https://wowwiki.fandom.com/wiki/Terrath_the_Steady?oldid=2614229"
Community content is available under CC-BY-SA unless otherwise noted.