For the structure in

The Temple of the Moon is the dwelling of the Sisters of Elune, and the center of all night elf spiritual life. It is said that Elune herself resides here in spirit.

Tyrande Whisperwind, the religious leader of the night elves, can be found on the second level.

The iconic statue at the center of the Temple depicts Haidene, the first High Priestess of the Moon.[1]

Gwennyth Bly'Leggonde says that she has been sent to Auberdine by the sisters of the Temple of the Moon to investigate strange happenings.[2]

Other Temples of the Moon

The temple was rebuilt in Darnassus after the Battle of Mount Hyjal. 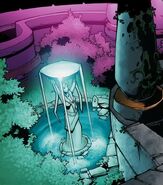 As seen in the comic series.
Add a image to this gallery

Retrieved from "https://wowwiki.fandom.com/wiki/Temple_of_the_Moon?oldid=2839120"
Community content is available under CC-BY-SA unless otherwise noted.