Start a Wiki
watch 01:19
'World of WarcraftMists of Pandaria' Dungeon Preview Temple of the Jade Serpent
Do you like this video?

Were you looking for the subzone in Jade Forest called Jade Temple Grounds?

Temple of the Jade Serpent

Mists of Pandaria, located in the Jade Forest. This is where the last emperor defeated the Sha of Doubt, but now the Alliance-Horde conflict has resulted in the Sha overtaking the Temple. The Temple itself is dedicated to one of the August Celestials, Yu'lon the Jade Serpent.[2][3] It is the first dungeon Alliance/Horde players can do when they arrive in Pandaria.

Rising high above the east coast of Pandaria, the Temple of the Jade Serpent stands as a sacred monument to the legendary pandaren emperor Shaohao's victory over the Sha of Doubt thousands of years ago. Recently, a disastrous conflict in the Jade Forest unleashed the sha, and several of the entities have raided the temple's most treasured stores of wisdom and knowledge.[4]

The temple was built in part to house the history of the pandaren and the exploits of their first emperor, Shaohao. It is guarded by one of the August Celestials, Yu'lon the Jade Serpent, until such time as the vessel for a successor is completed by the pandaren. Until the arrival of the Alliance and Horde, the Jade Serpent had not seen many of the races of the other continents of Azeroth in thousands of years, but recent events appear to have compelled Yu'lon into confiding in some of the newly encountered adventurers.

Entry, Fountain of the Everseeing, Scrollkeeper's Sanctum, Terrace of the Twin Dragons, Heart of Jade

Scrollkeeper's Sanctum upper hallways
Add a image to this gallery

The Temple of the Jade Serpent 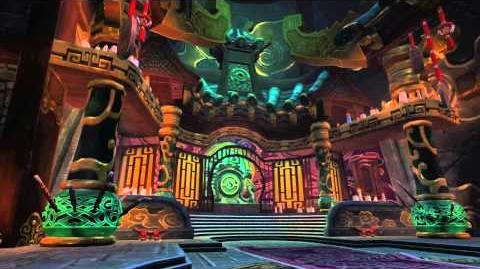 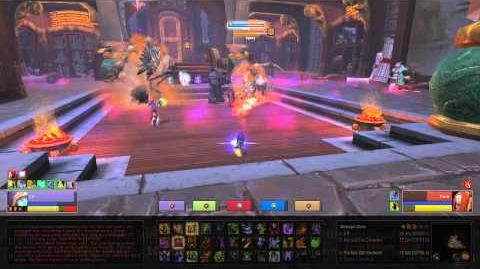 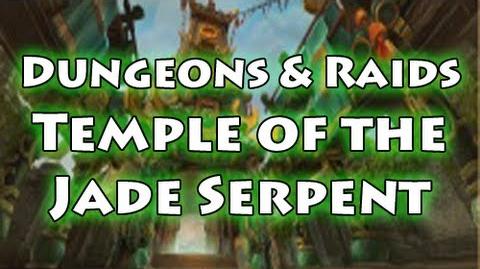 Archive.org Temple of the Jade Serpent

Archive.org Temple of the Jade Serpent

WoW Insider 5 things you need to know about the Temple of the Jade Serpent by Olivia Grace May 21st 2012 at 5:00PM

WoW Insider Mists of Pandaria: Dungeons and challenge mode by Alex Ziebart Mar 19th 2012 at 3:01AM

Retrieved from "https://wowwiki.fandom.com/wiki/Temple_of_the_Jade_Serpent?oldid=2787441"
Community content is available under CC-BY-SA unless otherwise noted.