The Temples of the Damned are unholy places of varying purpose, but mostly related to Necromancy, first used by the Horde and then the Scourge.

The first Temple of the Damned was a walled Orc base mostly composed of temples constructed in Azeroth, but it was destroyed in the First War by the human forces of Stormwind. 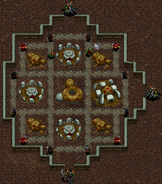 In Warcraft I
Add a image to this gallery

Later Temples of the Damned — called Grombolar, or bowels of the giant in the Orcish tongue — are the cabalistic dwellings of the dead. Created by Gul'dan to house his blasphemous Death Knights, the Temples were formed from petrified carcasses of the race of giants that inhabited the Orcish homeworld. The subterranean labyrinth of the Temple contains the fetid halls where the Death Knights dwell and study their depraved necromancy on fallen warriors reaped from the battlefields above.[1] (W2Man 84) Note that the symbol on one of the boulders is a Triforce from the legend of Zelda series.

In the Third War, the Scourge took over the structures. Once used by the orcish horde to channel demonic energies, the Scourge has now reclaimed this powerful edifice. From the Temple the insidious necromancers emerge to animate fallen corpses and the tormented spirits of the banshees are called into service.[2] (W3Man 106)

Retrieved from "https://wowwiki.fandom.com/wiki/Temple_of_the_Damned?oldid=2352408"
Community content is available under CC-BY-SA unless otherwise noted.