Note: For characters 110 and above, by default Teldrassil will be inaccessible and viewable only from a distance (unless they go back in time via Zidormi). For characters below 110, Teldrassil appears as it did before the

War of the Thorns.

This article concerns content exclusive to the original World of Warcraft game release.

Teldrassil is an island and great tree off Kalimdor's northern coast.[1] It was the home of the reclusive night elves and a stunning testament to the power of their magic and connection with nature.

The night elves moved their capital to an island off northwest Kalimdor.[2] It was here that the Circle of the Ancients and the wise druids pooled their power to create another World Tree, but on a smaller scale. They called this tree Teldrassil ("crown of the earth") and built their city of Darnassus in its branches. The island takes the name of the "tree" as well, and a twilit forest covered it.[2]

Teldrassil is truly massive, a huge trunk rising out of the sea and holding the entire night elf homeland, and the capital of Darnassus, in its boughs. The enterprise was not blessed by all of the Aspects, unlike its predecessor. Regardless, the behemoth of a tree dwarfs Nordrassil, large enough that a decent amount of land emerged atop its gargantuan limbs. Trees, flora, and fauna were spread across the magical tree.

After the cataclysmic events that followed the invasion of the Burning Legion, Malfurion went missing. Archdruid Fandral Staghelm took over the leadership of the night elven druids, convincing the Circle of the Ancients in Darkshore that it was time for the night elven people to rebuild the World Tree and regain their cherished immortality. However, his plan failed due to the fact that Nozdormu, the source of the night elves immortality, did not bless the tree.

The Circle of the Ancients and powerful druids combined their powers to grow an immense tree in the Veiled Sea. They called the tree Teldrassil, meaning "crown of the earth" in Darnassian. The night elves made their new home in the boughs of Teldrassil, creating a forest of mighty trees and flowing rivers, bathed in the endless night that fell over the lands of the elves from the dawn of time.

However, the calm of the enchanted forest has slowly fallen into the shadow of a sinister presence. Crazed furbolgs, satyrs and fouler beasts have appeared in Teldrassil, occupying all the attention of the vigilant Sentinels and the wise druids to ensure the safety of their new home. The source of this corruption remained a mystery for some time, until the conflict of the Emerald Nightmare spilled into the waking world.

Malfurion, upon returning to Darnassus, discovered that a remnant of a great evil he had sealed away had attached itself to Teldrassil. This corrupted the tree and drove it mad, spreading its evil to everything around it. The archdruid managed to remove this parasite, and eventually restored the tree to what it once was. Alexstrasza, impressed that the tree could prosper alone without her influence or her kin's, blessed it belatedly. The tree flourishes even more under the gift from the Life-Binder, even if still being unable to return the night elves' immortality.

The Gnarlpine furbolg became corrupted due to Ursal the Mauler's use of fel moss.

During the War of the Thorns, in an attempt to strike a devastating blow to the Alliance, Sylvanas Windrunner and the Horde pushed through Ashenvale to lay siege to Teldrassil from the shores of Darkshore. After hearing word of Malfurion Stormrage's survival, she chose to cover Teldrassil in flame instead of capturing it, killing all those trapped civilians within that could not escape in time to the water or through portals to Stormwind City. After the burning, Teldrassil is largely uninhabited and Darnassus is destroyed.

For characters below 110, the majority of Teldrassil's upper reaches is open forest and it resembles a mid-sized forested island. Darnassus takes up a large chunk on the western side of this island, while the smaller cities of Aldrassil and Dolanaar dot the remaining forest. All forms of terrain exist here, including streams, full-sized lakes, and a few hills that might be considered mountains.[1]

The entire zone of Teldrassil is in fact one huge tree, grown on an island off the coast of Kalimdor. As such, there are no ore deposits to speak of here and the night elves are not known as crafty blacksmiths or miners. However, because the tree is so full of life, herbs are numerous.

Although Teldrassil is only the size of a mid-sized island in width, its sheer height rivals any other island. It has been described as an "island continent".[3] Another reference in the book[2] and other sources simply call it an island.

Teldrassil contains no dungeons, raid dungeons, micro dungeons, or battlegrounds. It is the starting area for the night elves and contains a very sheltered 1-5 leveling area, Shadowglen. The night elf capital city of Darnassus can also be found in this zone, though the travel hub is actually located at Rut'theran Village (accessible by portal from Darnassus).

Effects of the Cataclysm

Teldrassil escaped the Cataclysm virtually unscathed, with the major exception of the shattering of Rut'theran Village. It has now been split from the mainland and exists as its own island. The boat routes from the destroyed port town of Auberdine in Darkshore have also been relocated here, so now there are three docks (one unused) on the island.

Effects of the War of the Thorns

For characters who have achieved at least level 110, Teldrassil will be engulfed in flames. It has been completely removed from the game world, and thus inaccessible by flying, swimming, or any other means, such as [Eagle Eye]. A marker for the Remains of Darnassus will appear on the map, but only as a reference.

Zidormi can be found near the main north to south road in Darkshore, however, and is able to take players back in time to before the tree was attacked if they wish to visit.

Note: all these travel methods are only available for players when the zone is in the pre-

Head to north Darkshore. Go to the Ruins of Mathystra. Use an Elixir of Water Walking (or similar class ability) and have a fast land mount. Ride out towards Teldrassil and look for a good place to start your ride. The fatigue zone has an irregular shape. Generally a north or northwest course across the fatigue zone will work. Ride towards the island, which you should be able to see. You have 60 seconds to complete the crossing. You will see Rut'theran Village when you arrive there.

Darnassus (Temple of the Moon) (to Stair of Destiny or Exodar)

Note: all these inhabitants are only seen when the zone is in the pre-

Note: all these resources are only available for players when the zone is in the pre-

Note: Though there are no pools, the waters in and around Teldrassil can be fished successfully with a minimum skill of 25.[citation needed]

Note: all these characters are only available for players when the zone is in the pre-

Teldrassil is home to several night elves of status. From the top of the tree Aldrassil, Tenaron Stormgrip sends promising young elves out into the outside world. In Dolanaar, Tallonkai Swiftroot leads the effort to fight back the corrupted furbolgs and satyr of the Great Tree, while in his small tent near Lake Al'Ameth, Denalan seeks to understand the nature of the strange affliction, seeping into Teldrassil.

Note: all these quests are only available for players when the zone is in the pre-

The first quests are simple, like in every other starting zone.

One of the most important quests for new night elf adventurers in Teldrassil is the Crown of the Earth quest chain. In this chain, night elves are sent to gather water from moonwells scattered all over the island. Each time they return with the moonwell water, they learn a little more of the night elf history. Other important quests include the Timberling quest chain, in which adventurers must help investigate a corruption of the timberlings of Teldrassil, and the Furbolg chain, which deals with the corruption of the local furbolg population.

Note: all these areas are only available for players when the zone is in the pre-

Teldrassil post-Cataclysm (current)
Add a image to this gallery

Teldrassil sees very little PvP action due to the fact that Horde players have to cross through Rut'Theran Village and Darnassus. The only way for Horde players to get to Teldrassil itself is via ship from Auberdine (also Night-Elf controlled) on mainland Kalimdor. Most other starting areas are directly accessible by the opposing faction without such hazards.

Pre-War of the Thorns 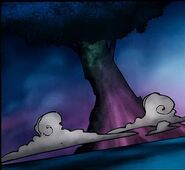 Teldrassil from the comic.

Teldrassil from the comic. 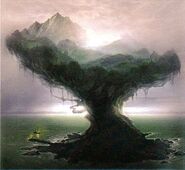 Idrassil, a possible concept for Teldrassil.

Darnassus bank from the air.

Rut'theran Village, post-Cataclysm
Add a image to this gallery

During and after War of the Thorns

The Horde advance on Teldrassil during the

War of the Thorns

Teldrassil burning, as seen from Darkshore

This section concerns content that is out-of-date. Reason: Needs video about War of the Thorns and later. 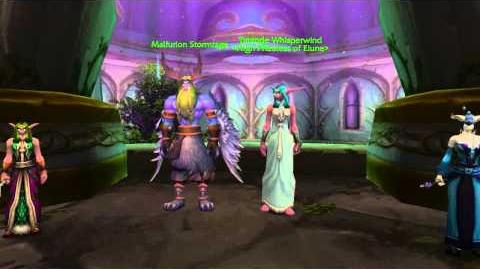 Cataclysm - Teldrassil Overview
Add a image to this gallery

Note: most of this info only applies when the zone is in the pre-

Pre-War of the Thorns

Retrieved from "https://wowwiki.fandom.com/wiki/Teldrassil?oldid=2849927"
Community content is available under CC-BY-SA unless otherwise noted.