Note: This article refers to both

Taylor (as Captain) is a human quest giver first encountered in his sunken ship, The Briny Cutter[45.1, 22.9] within Seafarer's Tomb in Kelp'thar Forest. Prior to this he leads a brave group of Alliance soldiers on a voyage from Stormwind Harbor and nearly meets his end with a surprised ambush by a kraken. He is captain of The Briny Cutter. Taylor is later encountered by players within the Shimmering Expanse, specifically within Nespirah[51.6, 48.2], the Tranquil Wash[48.2, 57.3], and the Ruins of Vashj'ir[33.1, 67.8]; he is also found at Promontory Point[42.8, 36.5] in the Abyssal Depths.

He is later found deeper within various zones of Vashj'ir and the Throne of the Tides.

His Horde counterpart is General Nazgrim.

Taylor has been promoted to Admiral, and was given command of Stormwind's royal flagship, The Vanguard, which would later run aground at The Jade Forest in Pandaria. Admiral Taylor is a prominent figure in the beginning Alliance quests in The Jade Forest.

After the landing on Pandaria he was captured by the Forest Hozen. Once rescued, Taylor leads the players and the SI:7 agents to locate and recover the "White Pawn". He involves the jinyu into the Alliance and leads them into a Battle against the Horde at the Serpent's Heart, but before the battle would have ended the violence and hatred broke the seal that the statue protected releasing the Sha, destroying the great statue in the process and heavily injuring Taylor. After the players evacuate him and the SI:7 agents from the area, Lorewalker Cho sends a message to players mentioning that everyone survived the encounter and they can be found at Binan Village in Kun-Lai Summit.

In Patch 5.1 He also makes appearances in Lion's Landing.

In Warlords of Draenor, players encounter Admiral Taylor's garrison in the Spires of Arak zone. The garrison is in ruins and inhabited by the spirits of Taylor's troops and followers. Players progress through several quests, attempting to find out what happened and to find Taylor himself. In the end, players find (and deal with) the cause of the garrison's destruction, but are too late to save Taylor.

When players complete the questline mentioned above, the spirit of Admiral Taylor is available as a follower for their garrison. 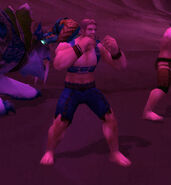 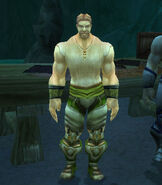 Taylor at the Tranquil Wash after escaping Nespirah. 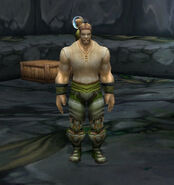 Taylor inside the Alliance-controlled Ruins.

Taylor within the Throne of the Tides.

A Monument to Admiral Taylor located in Southport.

The spirit of Admiral Taylor in Warlords of Draenor.
Add a image to this gallery

Retrieved from "https://wowwiki.fandom.com/wiki/Taylor?oldid=2825091"
Community content is available under CC-BY-SA unless otherwise noted.