Tanaris (aka The Tanaris Desert)[1] is a desert located in Southern Kalimdor, east of Un'Goro Crater and south of Thousand Needles. It is an arid land, covered in sand dunes and frequently exposed to dangerous sandstorms. The Steamwheedle Cartel goblins have established Steamwheedle Port and Gadgetzan as their main centers of operation. The dock in Steamwheedle Port is presumably used for transport to the outer islands of the Undermine, the goblin capital, but so far the goblins have proved unwilling to share the ships with the other races.

Tanaris is one of the easiest regions to travel around, being mostly flat sands with a few rocky outcrops, but it is also monotonus, being sparsely populated due to its harsh environment. There are also no roads (or even well-trodden paths) and heavy reliance is placed on the guiding system.

While mostly populated by Horde factions, the region is so barren that it is fairly safe for Alliance members too.

Cataclysm, Tanaris changed to a level 45-50 zone.[2] In addition the Steamwheedle Port was destroyed although it's still inhabited by goblins. This will make Gadgetzan a port.

Bornakk gave the hint that "Some Tanaris goblins wisely invested in desert real estate and reaped the benefits when it became beach-front property."[3]

Tanaris has been an endless sea of sand for aeons. Nozdormu, the great dragon of time, was said to make this land his home since time immemorial, thriving in the solitude of oppressive heat and miles of sand.[5]

Tanaris is the ancestral home of the bronze dragonflight based out of the Caverns of Time. The titans also have a holding here in the form of an entrance to the ancient land of Uldum, Whch was once guarded by elite Stone giants. found in the southern parts of the desert. It was here that Anachronos first discovered the full threat of the silithid, who had been making hives in the remote regions of Tanaris. The War of the Shifting Sands was consequently unleashed upon the western land of Silithus.

Cataclysm, Steamwheedle Port and many parts of Tanaris were flooded making Gadgetzan a port. Some Tanaris goblins wisely invested in desert real estate and reaped the benefits when it became beach-front property.

There are portals in Dalaran (The Violet Citadel) and Shattrath (World's End Tavern, by talking to Zephyr - requires Revered​​ with Keepers of Time) which take you to the entry of the Caverns of Time.

Tanaris covers a vast expanse of Southern Kalimdor, just south of Thousand Needles. It is a blazing hot expanse of rolling sand dunes under a cloudless sky. The southern region is more mountainous, with large cavern networks, with some extending deep beneath the surface. A vast realm, Tanaris holds many secrets. The land is mostly desert, and below ground are gigantic tunnel networks. They remain largely unexplored, for few have the fortitude to venture into such a harsh landscape. Still, rumors tell of all manner of creatures that hide within the tunnels and slaughter trespassers without hesitation. Although the sea of dunes does not look as if it would support a variety of wildlife, humans, Sandfury trolls, hyenas, scorpids, basilisks, and silithid bugs are quite common. Ocasionally, drakes are also seen soaring on the thermals that swirl over the great desert.[5]

Tanaris contains quite a few instances, including all the Caverns of Time instances, as well as Zul'Farrak. In addition, there are several micro dungeons in this zone, but no battlegrounds.

Cataclysm, massive flooding created permanent incursions all the way to Gadgetzan that re-shaped the coastline and destroyed Steamwheedle Port, but the damage was limited to mostly the northeast. Gadgetzan is now a port, but with less capability.

Tanaris is home to several characters of note. At Gadgetzan, Mux Manascrambler seeks aid in obtaining ghostly ectoplasm from undead spirits, and Senior Surveyor Fizzledowser investigates the coming of the silithid. And at Steamwheedle Port, Yeh'kinya attempts to learn more of the essence of an ancient god.

Gadgetzan as seen in Cataclysm

The surrounding devastation - pirate ships in the distance

Steamwheedle Port in Cataclysm (from the official site)

Zul'Farrak from the air
Add a image to this gallery 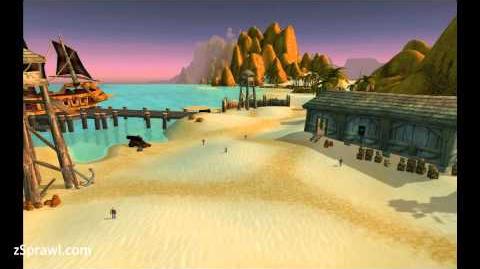 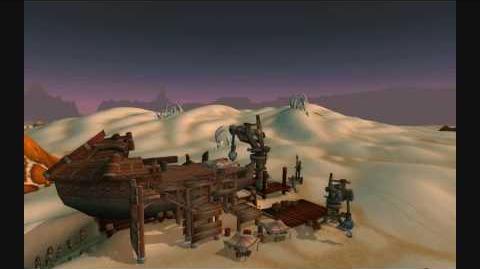 Cataclysm Beta - Tanaris From the Air NO ANACHRONOS 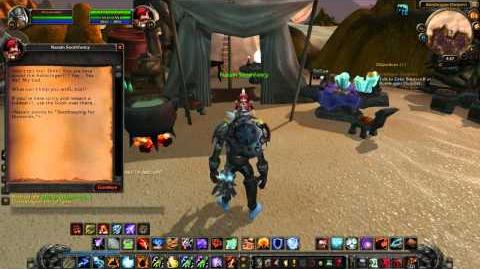 Cataclysm - Tanaris Overview
Add a image to this gallery

Retrieved from "https://wowwiki.fandom.com/wiki/Tanaris?oldid=2851227"
Community content is available under CC-BY-SA unless otherwise noted.