Tribal chiefdom,
then proxy for the Burning Legion in Draenor

Tanaan Jungle is a new zone introduced with

Warlords of Draenor. It is located in mid-eastern Draenor and is the home zone of the Bleeding Hollow clan of orcs. The Bleeding Hollow are a very shamanistic clan at this point in time, unlike their brethren from the future when Tanaan becomes Hellfire Peninsula. They are dark and bloody-minded; on the eve of becoming chief, the new chief removes his own eye to receive a vision of his death, which then determines how they will lead the clan.

Tanaan is a "monstrous jungle".

In primordial Tanaan, even the plants have teeth. Darkling fronds stab out at unlucky wanderers, or conceal canyons that plunge miles deep beneath the canopy - and these are far from the jungle’s worst dangers. Each day, warlords fell even wider stretches of Tanaan’s wilderness, striving to construct an apocalyptic device that will finally rend the gates of space and time for conquest unending.

Your journey’s beginning in Tanaan Jungle is sure to present challenges – many of which have very sharp teeth – but it’s also where you’ll be introduced to some of the greatest orc warlords and heroes of all time. Unfortunately, the orc leaders of storied clans such as Grommash Hellscream of Warsong clan, Kilrogg Deadeye of Bleeding Hollow clan, and Kargath Bladefist of the Shattered Hand clan aren’t going to be happy to see you. They won’t welcome you with anything other than unbridled savagery. You really shouldn’t expect anything to be on your side in this jungle.

Shutting down the Dark Portal is your first priority, but the mission may quickly go awry. Even if you do manage to seal the portal, your party will still be trapped in the middle of a hostile army. Your only option is to fight your way out! You might even be forced to accept the help of the infamous Gul’dan. Fortunately, you’ll also have luminaries such as Thrall, Khadgar, and Vindicator Maraad by your side. You’ll also meet some new heroes who will take up arms for you: the brutal Frostwolf warrior Ga’nar, and a promising young draenei acolyte named Yrel.

As of Patch 6.2, players are able to return to Tanaan Jungle to brave its many dangers and attempt to defeat the Iron Horde and its new leader, Gul'dan. After Thrall's defeat of the fugitive Garrosh Hellscream in Nagrand, Gul'dan has imprisoned Grommash, who refused a second time to drink the Blood of Mannoroth. Gul'dan has assumed control, establishing himself in a familiar place, Hellfire Citadel and is poised to restart the process of using the Burning Legion to remake the Iron Horde. Archmage Khadgar is researching ways to counter Gul'dan's magic, but the final assault will be in the hands of Adventurers.

The alliance and horde have set up outposts at

Vol'mar, which each act as a base of operations for daily assaults on various areas of the jungle. 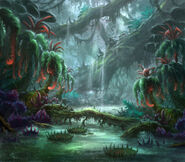 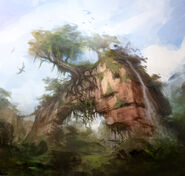 For those newly boosted to level 90 in Warlords of Draenor your experience in Tanaan Jungle will gradually introduce you to your new class abilities and mechanics. You’ll still be able to join your friends in this new adventure while becoming acquainted with your new hero and taking on greater challenges and gaining greater rewards.

Edit to the right of the section title.
Retrieved from "https://wowwiki.fandom.com/wiki/Tanaan_Jungle?oldid=2831653"
Community content is available under CC-BY-SA unless otherwise noted.