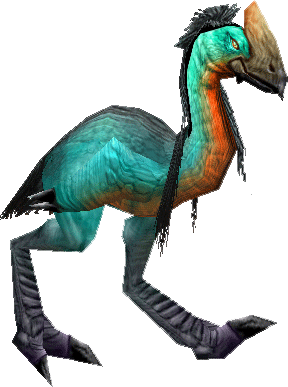 A Tallstrider, or simply strider, is a cassowary-like beast native to Kalimdor.

Tallstriders are peaceful avian creatures, they are omnivores, witch means they may feast on both meat and plants. Tallstiders tend to graze on grasslands and forests where more food (such as fruits and dead animals) is to come by. Although, some tallstriders may act territorial and/or aggressive towards other species mostly beacause they are protecting their young, or simply want a quick snack. Tallstriders are very well known for their delicious meat and priceless feathers.

The inspiration for the tallstrider is probably some species of immense prehistoric birds like the moa, for instance, or the terrorbirds from South America.

Though hunters can respec their pet tallstriders into Cunning or Tenacity, they are inherently Ferocity. In addition to the abilities that come standard with all pets ([Growl] and [Avoidance]) and those given to their natural or retrained specialization, all tallstriders are given the following:

The subspecies below can be tamed by hunters. Tauren hunters start with a purple tallstrider.

Mobs with level numbers can be tamed by hunters.

Retrieved from "https://wowwiki.fandom.com/wiki/Tallstrider?oldid=2844132"
Community content is available under CC-BY-SA unless otherwise noted.