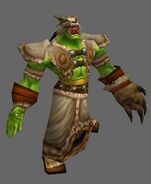 An fan rendition of an Orcish Shaman using WoW models.
Add a image to this gallery

I am seeing a lot of out of date information on the shaman pages. Are people working on updating them or have they been forgotten about?

Now that there is an exhaustive list of shaman spells and totems, should the Abilities section be altered at all? --Balthazar

I dunno. Maybe some of the sections needs to be shorten if it seems too overwhelming, but it doesn't bother me because I use the category/section box. The ability section is pretty short, but I can take some out like Water Walking and Reincarnation.
Also a side question, I noticed that the ability definition is kinda vague, so should we make it clear? One suggestion that I have in mind is to differentiate between abilities and spells: spells are class traits that uses mana points for combat, but abilities are class traits that do not use mana points, and utility spells. --Kultath 19:11, 8 Feb 2005 (EST)

I added the followng: "This is how the five attributes affect a shaman [1]: Your level's worth of agility will increase your chance to crit on a melee hit by about 1.03% (e.g., +60 agility will give a level 60 shaman +1% crit)." From a post on the forums... I'm not sure this is correct though -- when I cast Grace of air I get +3% to crit per 60 agility (lv 60 shaman with 5/5 Thundering strikes and 2/2 in enhancing totems). I think the scale may be sliding, a kind of diminishing returns kind of forumula. Here's why: When I'm naked I have a 2.52% chance to crit (which surprised me since Thundering Strikes is supposed to give me +5% to crit, does that mean it's possible to have a "negative" percent chance to crit even if the game shows zero. Does it ever show zero)? Anyhow, 2.5% chance to crit when I'm naked, that's with a base agility of 57. With 28 more agility from armor I have 15.02%. With 77 more agility from GOA I have 18.93%.

I suggest that the History section be moved to Shaman (lore). No other class page has one of these sections. --Supahglu 16:15, 6 February 2007 (EST)

The Restoration tree information is slightly out of date. Although the correct change to the Mana Tide Totem effect has been documented, it is no longer the end tree spell/ability. Earth Shield is now at the end of the tree, and functions as the shamans HoT (to some effect).

Since I do not know how to change it, I though I should point it out... the image of the female Tauren Shaman towards the top of the page is actually a Druid. She is wearing Tier 2 raid armor, the Stormrage set. I suggest that it should be moved to the druid page, especially since Tauren druids are not as represented visually there. --Hidden in trees 01:06, 15 July 2007 (UTC)

Pally Divine Intervention (if you have 2 rezzers), Engineer Cables coupled with any of the Removal from Combat abilities (Invisibility, Feigh Death, Vanish)

That isn't solo wipe control, as they have to cast it on someone else that can res.

Just for clarification, I was reading Lord of the Clans the other day and it seemed that shamans like Thrall and Drek'thar also had a strong control over the Spirit of the Wilds. In WoW, this is probably shown through their healing abilities. But in RP, are druids stronger over nature than shamans because they work with fewer elemental Spirits? Jclipps 20:09, 17 February 2008 (UTC)

It's more of a friendly relationship. Shamans do not demand power from the elements, they request it.Kraas (talk) 15:28, 8 December 2008 (UTC)

Well I've been hearing a lot of talk about shamans being overpowered. Is it true i don't have a shaman. I think personally that they aren't, nut still I want'd to know what others thought about the issue.--

Someone recently edited out alot of the talent tree info on this page. At first I was wondering why, but then most of the info should have been in Shaman talents. If you see anything that was removed from here that is helpful, please put it in Shaman talents. --

Shamans worship the elements, not the elementals themselves. Jormungand

Why do many consider Trolls to be the best Shamans? I'd say it's more in place in Tauren culture due to the elemental aspect and the spiritual aspect. Plus many racial traits help the weak Shamans. Thoughts? —The preceding unsigned comment was added by BobNamataki (talk • contr).

I have seen several orc mobs that are called dark shamans. Anyone know something about them? Andreioplst (talk) 07:35, December 1, 2009 (UTC)

Moved to Forum:Element/resto Shaman: Which Att?.

I've removed this statement from the article:

According to the link posted, Shamans are in equal standing with other classes (Warlocks and Rogues) and very near Warriors, as of now. Scarbrowtalk 16:31, March 4, 2010 (UTC)

Still pretty new here, but is it really necessary for this section to have nine subsections instead of just being a bullet list, it seems unnecessarily cluttered. Chalormendor (talk) 22:23, April 11, 2010 (UTC)

Retrieved from "https://wowwiki.fandom.com/wiki/Talk:Shaman?oldid=2234083"
Community content is available under CC-BY-SA unless otherwise noted.