Formats for the Eastern Kingdoms and Kalimdor sections are inconsistant. --Cigawoot 13:33, 15 March 2006 (EST)

Shortly after patch 1.12 I started seeing several new flight paths marked "INVALID", some in inaccessible zones, appear in the Eastern Kingdoms, see below. Apparently this only happened for Horde players, and only on Macs (both of which apply to me.) Might be worth adding to the article -- if I remember right, they started appearing at the end of August and as of this writing I think they're still there. (And sorry for the whole image but I forget how to put a link to an image.) 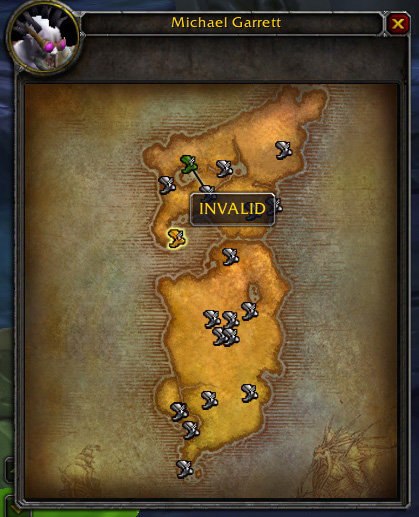 Many, but not all, of the prices listed here already include the 10% discount for being Honored with the flight master's faction. (e.g. 99

An update, and a suggestion

What would you think of putting Blood Watch and The Exodar under a separate heading, since they only connect to each other and nothing else? --Mwalimu 20:55, 16 February 2007 (EST)

All FPs in the game as of now (WoW 2.0.12) should now be listed. Non-connecting networks in the Draenei and Blood Elf lowbie zones are sorted to the top of the listings for their sections, and colored differently... I think that's enough of a separation. Gazmik Fizzwidget T · C · W 22:37, 11 April 2007 (EDT)

There's also 2 more flight points, both from Moonglade. Druids (I don't think the other classes can do this) can take a free flight from Moonglade to Thunderbluff (if they are Horde) or to Teldrassil (Rut'theran Village if they are Alliance). I'm not too sure about the exact flight time, but to get to Thunderbluff, it takes about 10 minutes. --Ishen 14:55, 24 February 2007 (PST)

This article's pretty long and a bit of a pain to navigate (it's long enough to trigger the 32K warning on edit)... seems like splitting off pages for the Alliance and Horde FPs would be a logical way to ease the burden. I've been going through and verifying/fixing the tables (started by filling in Horde Outland FPs yesterday), so I'd be happy to handle the split... but I'm not sure where to put the resulting articles. Should they be subpages (Flight path/Horde) or separate named articles (Alliance Flight Paths)? Gazmik Fizzwidget T · C · W 15:15, 8 April 2007 (EDT)

So, I've finished the adding/verifying of current FPs, times, and (non-discounted) prices. Is splitting something that requires a vote, or is an admin's thumbs-up okay? (Sorry, wikinoob here.) Gazmik Fizzwidget T · C · W 22:37, 11 April 2007 (EDT)

How about including the coordinates of the FP. I know that when I go into a new town, sometimes you have to search or ask the general population where the FP is (such as in SW, where it is not at all obvious.)

Retrieved from "https://wowwiki.fandom.com/wiki/Talk:Flight_path?oldid=1233813"
Community content is available under CC-BY-SA unless otherwise noted.