Surely you've been a student once in your life, <class>. You learned from an instructor, and you gained respect for them in some way, yes? Maybe not as a person, but at the least, as one who know more than you and was willing to teach you. If not, use your imagination...

What would you do if you came to realize your instructor may not know as much as you thought, and that you may have found a better path? 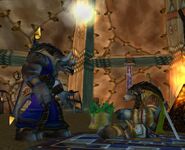 solar [eclipse] [3]
Add a image to this gallery

Retrieved from "https://wowwiki.fandom.com/wiki/Tahu_Sagewind?oldid=2712533"
Community content is available under CC-BY-SA unless otherwise noted.