For the mob, see Stone Guardian.

Stone guardian is a label applied to two groups, or types, of titanic construct. Both are stone constructs that guard things. Stone guardians come in many forms.

Archaedas, Stone Guardian of the Vault, is one of the ancient servants of the titans, a giant of stone crafted to guard the vault of Uldaman. When threatened, he calls on other stone guardians as often as possible.[1]

The other stone guardians that Archaedas calls on likely include the Animated Statues of Archaedas,[1] Earthen Guardians, and Vault Warders that he brings to the fight.

The Stone Guardians in Un'Goro Crater are carved with the same sort of runes found on the Crystal Pylons and the hovering pylons that guard the entrance to the crater.[2] 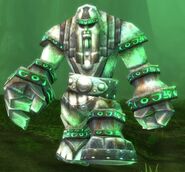 Stone Guardian of Un'goro
Add a image to this gallery

Retrieved from "https://wowwiki.fandom.com/wiki/Stone_guardian?oldid=2403453"
Community content is available under CC-BY-SA unless otherwise noted.