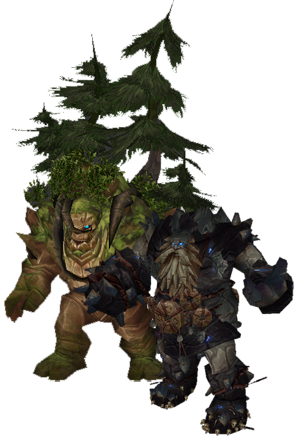 The term stone giant refers to many different, yet possibly interconnected, titan creations. All three are, of course, giants made of stone.

Archaedas, the stone guardian, has also been described as a "giant of stone".[1] This may also include constructs similar to Archaedas.

This type of stone giant may also include (or be known as) stone guardians,[1] stone keepers,[2] or stone watchers.[3]

Stone giants[4] (also called wood giants[5]) are found primarily in Northrend. They look like mountain giants with trees sticking out of their backs, and roots wrapped around their heads. These stone giants look more like a type of colossus. Some of the stone giants are rune-inscribed, the runes control the giants.[4][6]

Based on his quotes and his association with Kurun, Gavrock may be one, but without the trees. Also, the Grizzly Hills Giants who work with Kurun may be the same type of creature.[7]

Some of Northrend's stone giants are more detailed appearing more human-like with carved beards, and armor. One of their hands seems to have been replaced with a spiked boulder.

Retrieved from "https://wowwiki.fandom.com/wiki/Stone_giant?oldid=2629719"
Community content is available under CC-BY-SA unless otherwise noted.