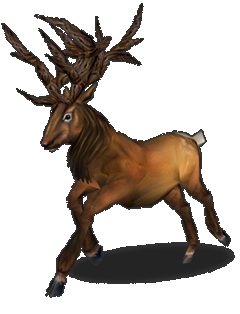 Stags are beasts, a type of deer. They are large animals, taller than humans, and have antlers. Most stags are neutral when approached.

Stags are common in forested areas throughout Azeroth. They are targets for humanoid hunters and natural predators like wolves, but their mighty antlers and ferocity make them difficult prey. Stags avoid conflict, but can be aggressive in larger groups or when startled. They are particularly aggressive during mating season in the fall, and only at this time are they commonly found with females.[1] (MGWS 22)

If a player attains a cooking skill of 110, they can learn the Lean Venison recipe from a Cooking trainer, allowing them to make use of the Stag Meat often dropped by these creatures.

Though hunters can respec their pet stags into Cunning or Ferocity, they are inherently Tenacity. In addition to the abilities that come standard with all pets ([Growl] and [Avoidance]) and those given to their natural or retrained specialization, all stags are given the following:

They appear as critters in Warcraft III: Reign of Chaos. The animated gif from the website is called "deer".


Retrieved from "https://wowwiki.fandom.com/wiki/Stag?oldid=2751934"
Community content is available under CC-BY-SA unless otherwise noted.