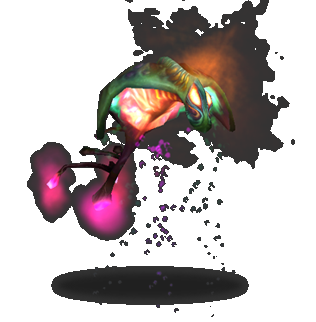 Spore bats are a sub-species of spore walkers and are indigenous to Zangarmarsh in Outland. Like the spore walkers, they turn spores into a deadly poison to hunt their prey. Unlike the Spore Walkers, they can fly. However, they are not as aggressive as Spore Walkers, as most of them are neutral towards players. They can be tamed by hunters.

When they collapse, they release a series of spores which affects a variety of species and provides a short-term buff of considerable power.

Though hunters can respec their pet sporebats into Ferocity or Tenacity, they are inherently Cunning. In addition to the abilities that come standard with all pets ([Growl] and [Avoidance]) and those given to their natural or retrained specialization, all sporebats are given the following:

Retrieved from "https://wowwiki.fandom.com/wiki/Spore_bat?oldid=2742189"
Community content is available under CC-BY-SA unless otherwise noted.