Do not confuse with Snarlmane the Bloodgorger a reddish gnoll of the same first name.

Snarlmane is a level 23 rare mob undead gnoll found in Fenris Keep in Silverpine Forest. He is on a 4-6 hour respawn timer.

Snarlmane was the leader of a gnoll group in Tirisfal Glades and was caught in between a conflict involving Varimathras and Sylvanas during the third war. Sylvanas used one of her banshees to possess Snarlmane and use his Gnolls in suicide assaults against Varimathras' forces.[1]

As he is now undead and found among the other Rot Hide gnolls in habiting Fenris Keep, it seems safe to say he was killed during the conflict and later raised by the Scourge.

Snarlemane: Back, you dead! No one trespasses on our territory!

Sylvanas: Will someone please steal his mind and be done with it?

Statistics of Snarlmane from Warcraft III

Note:Snarlmane is being compared to a Gnoll Overseer which is the most powerful non-unique type of Gnoll in WC3. 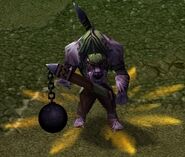 Retrieved from "https://wowwiki.fandom.com/wiki/Snarlmane?oldid=2849538"
Community content is available under CC-BY-SA unless otherwise noted.