Slain Crew Member's Spirits come in two types aboard the Alliance Gunship in Deepholm; both have a chance to be encountered when on the quest All Our Friends Are Dead. The first type is friendly to players and will reveal how the Gunship was tricked into attacking the Horde ship, Storm's Fury, as it was attempting to deliver a fragment of the World Pillar to the Temple of Earth. Players learn that the Twilight's Hammer clan infiltrated the ranks of the crew, then poisoned everyone after the deed was done.

The second type of spirit is immediately hostile to players, mistaking them for members of the Cult. They attack as soon as they are summoned. 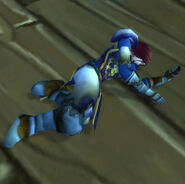 One of the crew member's bodies.
Add a image to this gallery

Retrieved from "https://wowwiki.fandom.com/wiki/Slain_Crew_Member%27s_Spirit?oldid=2611093"
Community content is available under CC-BY-SA unless otherwise noted.