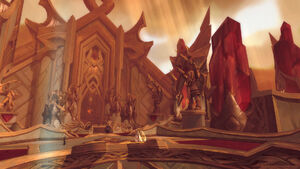 The Skyhold (Valhalas in vrykul language) is a portion of Halls of Valor located in Stormheim and serves as the seat of power for Odyn and his spirit warriors. It is also the order hall for the warrior class.

With the Burning Legion having successfully rampaged across the Broken Shore and spilling into Azeroth, warriors are summoned back to the battlefront to face another onslaught. They are joined by a small group of kvaldir sworn to Odyn. Despite their best efforts, the kvaldir fall in battle, taken into the Halls by the val'kyr. The hero falls as well in the final battle against the demon commander; it appears Odyn has been watching, however, for the val'kyr take the hero just before death to the Halls.

There, Odyn reveals that Helya has, among other things, sealed the Halls, preventing any of his warriors from leaving. He sees in the adventurer unmatched heroism and decides to make the adventurer his "living warrior", one able to escape the magical constraints of the Hall to do his work. Thus he sends the hero to reclaim an Artifact Weapon.

The flight master, Aurylia, provides a "jump" to Dalaran.

Warriors "die" in their introductory questline to gain initial access to the Halls. Once their artifact quests are complete, they are able to return via their class hall via [Jump to Skyhold] ability when in a circle of light by Val'kyr of Odyn located at quest hubs and near the broken wall at the edge of Krasus' Landing in

Eye of Odyn (command board)

The Great Mead Hall interior
Add a image to this gallery

Retrieved from "https://wowwiki.fandom.com/wiki/Skyhold?oldid=2811722"
Community content is available under CC-BY-SA unless otherwise noted.