Demonology warlocks are the masters of demons, summoning them forth to do their bidding. With the Skull of the Man'ari in hand, they are able to command and empower the greatest of these malefic beings.

This artifact weapon was introduced with World of Warcraft: Legion.

Before the eredar served the titan Sargeras, one of their greatest leaders, Thal'kiel, had unprecedented skill with summoning and binding magics. Driven by ambition, he reached into the Void and was answered with knowledge of dark creatures unlike any the eredar had seen before. His audacious power grab infuriated the demon lord Archimonde, who struck him down, then had his skull gilded and placed on display as a warning. Today the dreadlord Mephistroth uses it to enhance his ability to summon and command demon armies for the Legion.[1] 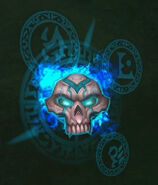 Solo-acquired with Patch 7.2.0
Add a image to this gallery

Retrieved from "https://wowwiki.fandom.com/wiki/Skull_of_the_Man%27ari?oldid=2814555"
Community content is available under CC-BY-SA unless otherwise noted.