Singe is a level 24 elite black dragon whelp found in Stonewatch Keep in the Redridge Mountains. Singe is Gath'Ilzogg's companion.

Singe was originally to be a black drake that served as a pet or advisor to Grom Hellscream in the cancelled Warcraft Adventures: Lord of the Clans. It's unknown if he was meant to be an enemy (perhaps manipulating Grom) and perhaps having connections to Deathwing who was also in the game. Because Warcraft Adventures was cancelled, the status as Grom's companion likely is not part of lore. 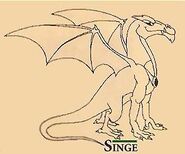 Retrieved from "https://wowwiki.fandom.com/wiki/Singe?oldid=2856092"
Community content is available under CC-BY-SA unless otherwise noted.