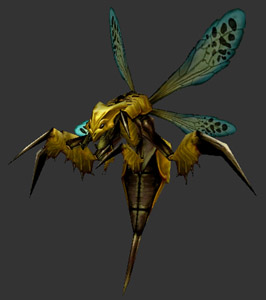 Silithid wasps are the flying attack troops of the silithid. They are very aggressive and can often be found in swarms. There is also a smaller version of them that can be found flying near the nests.

Silithid wasps are the mobile attack force of a hive, patrolling the territory’s borders and ruthlessly driving out intruders. They are fearless combatants who willingly sacrifice themselves to bring down a foe. Wasps begin learning to fly from the moment they molt out of their broodling state, and use their mobility in combat to great advantage.

Although a wasp has legs for perching while the creature rests, they are useless for ambulation. Silithid wasps emit a telltale droning sound when flying or hovering. The sound increases dramatically as more wasps add to the formation.

A large squadron of silithid wasps can be heard up to half a mile away, depending on ambient noise. Silithid wasps are 7 to 8 feet long and weigh 150 pounds.[1] (MG 124)

Retrieved from "https://wowwiki.fandom.com/wiki/Silithid_wasp?oldid=2728332"
Community content is available under CC-BY-SA unless otherwise noted.