The village can be seen from the hippogryph when flying to or from Nighthaven in Moonglade. The settlement is in the mountains between Darkshore, Moonglade, Felwood, and Winterspring. Before the Cataclysm it was almost impossible to reach by normal ways of travelling. There was and still is although, a way for players to reach this village which requires finding and following a very specific path along the mountains west of Winterspring. It is situated in Darkshore geographically.

The levels of the trolls vary between 52 to 58, they can be engaged by the Alliance (but not the Horde). They give experience and loot when killed. Some trolls also dance and seem to be celebrating some kind of festivity. Aside from the main populace, there are four notable characters, including Una Ji'ro, Jory Zaga, Krah'ranik, and Voriya. A tauren head can be seen hanging by a rope stake on their dancefloor.

Beside a handful amount of troll huts, there is a cave with uninteractable tablets within. A waterfall falls into the main feature of the village — the gray-blue lake. The village is divided into two parts, separated by the small river one can cross using the bridge.

Shatterspear Vale became an accessible subzone of Darkshore in World of Warcraft: Cataclysm, connected to the rest of the zone by the Shatterspear Pass. A screenshot of the village released via press kit shows an ancient nearby. Other screenshots reveal that the night elves wiped out all Shatterspear trolls.

They say that the grass is greener on the other side...

The dancing trolls of Shatterspear Village.

Up the hill leading to the cave; the grand waterfall in the background.

An abandoned boat floating on the lake.

They seem to thrive in the village...

Hidden from sight by high mountains.

Voriya dancing on the right.

"Friendly" means that these trolls are not to wage war with you...

In World of Warcraft: Cataclysm, an ancient Protector stands in front of the village 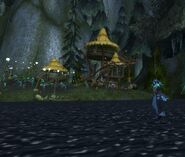 Shatterspear Village as part of the Horde

Retrieved from "https://wowwiki.fandom.com/wiki/Shatterspear_Vale?oldid=2824938"
Community content is available under CC-BY-SA unless otherwise noted.