Start a Wiki
The Shaper's Terrace is a Titan-related area that was added to Un'Goro Crater in Wrath of the Lich King on the bluffs above Marshal's Refuge to the east. It seems to be related to Titan buildings found on Northrend and elsewhere in southern Kalimdor. It is not easily accessible by foot (though it's relatively simple to walk down to Marshal's Refuge from it) and is intended to only be accessed through the Waygate[40, 82] in Sholazar Basin.

Recently, the terrace has been taken by members of the Cult of the Damned. For the quest

High Cultist Herenn. He is located in the Hall of Repose and possesses the [Omega Rune] necessary to activate the Etymidian.

Currently it is also the location in which the quest

[80] Meeting a Great One unfolds, having to show Roo one of the "great ones". 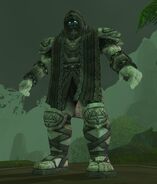 The Etymidian
Add a image to this gallery

Retrieved from "https://wowwiki.fandom.com/wiki/Shaper%27s_Terrace?oldid=2350537"
Community content is available under CC-BY-SA unless otherwise noted.