For related articles, see Category:Shamans.
For the correct spelling and more on the word, see spelling of shaman.

Shaman is a hybrid class that specializes in offensive spellcasting, melee damage dealing, or healing. As such, the class is considered one of the most adaptable and versatile. Shaman can also provide group support in the form of stationary totems that, when placed on the ground by the shaman, either provide benefits to party members or deal damage to enemies.

The shaman class was originally only available to three of the Horde races: tauren, orcs, and trolls. Designed as a counterpart to the paladin, the class was once unavailable to the Alliance. This purportedly created trouble in developing both classes since they needed to be balanced against each other. The release of The Burning Crusade expansion introduced shaman to the Alliance through the draenei while the Horde gained access to the blood elf paladin, thus making it possible for both classes to be developed independent of each other.

Originally, shaman were almost allowed a tanking role[1] through the old enhancement talent tree. Their lack of heavy plate armor and the various changes made to their talent trees over time phased out their tanking potential in favor of healing and damage dealing. While most shaman are capable of adequately tanking instances prior to reaching level 60, higher level areas and instances require tanks to have stronger passive defenses and damage mitigation than shaman have, despite their versatility and healing abilities.

Shaman are spiritual visionaries of tribes and clans. These gifted warriors can see into the world of spirits and communicate with creatures invisible to the eyes of normal beings. They are beset by visions of the future and use their sight to guide their people through troubled times. Although shaman may seem wise and serene at first, they are formidable foes; when angered, their wrath is as fierce as those who have a connection to Eternals or nature.[2]

Shamanism has existed since the sapient races first discovered the power of the elements of Earth, Air, Fire, and Water. On Draenor, now shattered Outland, the orcs were shamanistic; on Azeroth, trolls and tauren were shamanistic. Though shamanism on Azeroth flourished, shamanism on Draenor was all but extinct by the time of the great crossing of the Horde into Azeroth via the Dark Portal. The greatest, and yet some of the most vilified, orcs were once shaman; Zuluhed the Whacked, Ner'zhul, and even Gul'dan were all shaman. Kil'jaeden distorted the shaman's connection with their spirits in the sacred mountain of Oshu'gun, taking on the form of the shaman's ancestors to convince them that the draenei were enemies. The ensuing massacres upon several draenei hunting parties offended the spirits, who eventually denied the shaman their powers.

All was set for the transition.

Cut off from their elemental powers, former shaman turned to the powers of the Burning Legion, becoming warlocks. Though many tried to hang onto their roots, it was impossible. Even Drek'Thar was sucked into the dark magics, though he later repented; to this day has never forgiven himself for the acceptance of the demonic corruption that plagues himself and the orc race. Ner'zhul was the warlock who created the portals from Draenor to many other worlds. The portals ripped Draenor apart, creating the ravaged land of Outland. He repented, but was dragged back into the fold by Kil'jaeden, who promised him an endless existence of suffering and pain if he did not serve the Legion. Ner'zhul accepted this second chance at serving the Legion and was changed into the mighty being known as the Lich King. He later inhabited the body of Arthas Menethil, his first and most powerful of the second generation of death knights.

Shamanism in the orcs was all but nonexistent until Thrall, son of the deceased Durotan and future chieftain of the Frostwolf clan, grabbed hold of the reins of Warchief of the New Horde. This ushered in a new generation of shamanism, breaking the crippling lethargy of the captive orcs while outlawing the dark magic of the Burning Legion. At the time of the internment camps, "shaman" was a derogatory term for someone who told fantastical and unbelievable stories.[3] Shamanism is now in good repute, though, as the New Horde was led for a long time by Thrall, a shaman of great power.

The shaman class can be played by the following races:

Each race has its own distinct advantage, no matter its class; consequently, many players who wish to play shaman factor in advantages and abilities of the various races when starting their characters. Some prefer tauren for their [Warstomp] racial ability. Others prefer orcs as stun effects don't last as long when used against them, which is helpful versus a rogue, as well as against a shadow priest; likewise, the orcs' [Blood Fury] racial ability can be very useful for a shaman because they get a bonus to both their melee attacks and spell damage. Both of these abilities are very useful in PvP. Still others enjoy playing trolls because of their [Da Voodoo Shuffle] and [Berserking] powers. Players looking for a boost in healing for PvE or PvP may find that the draenei's usable racial ability, [Gift of the Naaru], is an effective heal over time spell that can be cast with no mana cost. 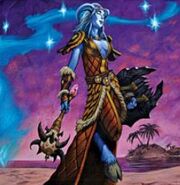 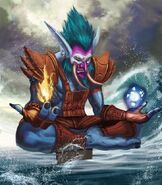 Totems are unique to shaman. Prior to Legion, only one of each elemental type could be used at a time. Totems of the same nature type can now be summoned together, allowing shaman to have Healing Stream Totem and Healing Tide Totem up at the same time.

Elementals were tied to totems, but were changed to guardians that follow and assist the shaman. Totems’ maximum health is always equal to a percentage of the shaman's maximum health. In addition, totems that need to be placed at a specific location can be directly placed using a targeting reticle.

Shaman see "Totem Timers" below their character portraits. As with buffs, a simple right-click to the "Totem Timer" icon will be destroy a totem with no mana refund.

Shaman wear mail armor. It is not uncommon for many shaman to take up leatherworking as a profession because it's also used to craft mail armor with beneficial stats for shaman at higher levels.

Shaman can use one-handed maces with shields, staves, daggers, fist weapons, one-handed axes, and two-handed axes and maces by default.

There are a number of end-game gear sets for shaman. There are also sets for PvP and all these sets can be found on the Shaman sets page.

Totems are a major part of the end game and knowing what totems will benefit the shaman's group members best in different situations is all part of the strategy involved in playing a shaman. With the versatility that comes with shaman, they will always be the ones adapting to various issues their group might run into. If the party runs into an encounter which is very DPS heavy, shamans will find themselves supporting DPS, occasionally throwing in a heal if needed. The same goes for encounters that require lots of healing.

Shaman's role in parties and raids varies depending on how they choose to specialize and equip themselves. For instance, restoration shaman get very little benefit from going melee, whereas elemental shaman can cast ranged DPS and still cast the occasional support heal and possibly main heal any 5-man instance. Of course, it's also important to remember that restoration shaman can cast several damage spells for free, allowing them to supplement DPS occasionally without consuming mana better used for healing.

Replay.WaybackMachine.org Shaman Q&A with Ghostcrawler (old details history and future of the class for Patch 3.2)

Retrieved from "https://wowwiki.fandom.com/wiki/Shaman?oldid=2856138"
Community content is available under CC-BY-SA unless otherwise noted.