Shalamayne is a legendary sword wielded by Anduin Wrynn, current King of Stormwind. The weapon was previously wielded by his late father, King Varian Wrynn.

After Varian was split into two people by Onyxia's magic, the two ultimately found each other again and resolved to slay the black dragon. They were granted the elven blades Shalla'tor the Shadow Render and Ellemayne the Reaver by Jaina Proudmoore, who aided them in the assault on Onyxia's Lair.[1]

When Onyxia inadvertently combined the two Varians back into one person, the two blades were merged into a single weapon as well.[2]

It has a unique narrow edge at the point and a thicker, angled edge further down. The gem in the lower part of the blade glows like a sun. There is a backward arch at the bottom of the blade, and the hilt is long and slender.[3]

Shalamayne is featured prominently in the Battle on the Broken Shore and Varian was holding it when he was killed by Gul'dan. After his death, Anduin, his son, found the sword at the very place his father died, took hold of it, reactivating its power in a new light.[citation needed]

Varian wielding Shalamayne against the Scourge 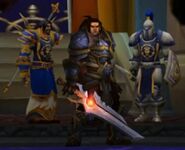 Shalamayne, wielded by Anduin Wrynn in the Battle for Azeroth cinematic
Add a image to this gallery

Patch 7.2 In-game Cinematic - A Found Momento Raising a King
Anduin takes up Shalamayne at where Varian fell
Add a image to this gallery

Retrieved from "https://wowwiki.fandom.com/wiki/Shalamayne?oldid=2848011"
Community content is available under CC-BY-SA unless otherwise noted.