Were you looking for the Draenor zone named Shadowmoon Valley?

Shadowmoon Valley is found in southeastern Outland, east of Terokkar Forest. It is the location of the Black Temple (where Illidan Stormrage once resided), and also houses a dwarven settlement named after (and led by) Kurdran Wildhammer, as well as the prison where Illidan's former jailor, Maiev Shadowsong, is held captive.

In addition to being the location of the Black Temple, the region gave name to Ner'zhul's Shadowmoon Clan, who once had their holdings there. Prior to destruction of Draenor, the north shore of the region was known as the Skeletal Coast.

Worldofwarcraft.com says the following about the Shadowmoon Valley:

This valley is a grim spectacle of demonic magic run amok. Day and night, molten fel energy erupts from the land and lights the sky with bilious green flame. To the east lies the Black Temple, Illidan Stormrage's seat of power. With the Dark Portal reopened, Illidan and his allies struggle to hold off Legion reinforcements and keep all other Outland portals closed.

Shadowmoon Valley used to be an idyllic forest shrouded by eternal night. Upon Gul'dan's creation of a huge volcano with his demonic powers, much of the area was turned into a barren wasteland of rock and ash, with little vegetation. Like the rest of Outland, Shadowmoon Valley was further torn asunder during the destruction of Draenor by the countless portals created by Ner'zhul. This fragmented the zone, stripping away several sections of former shoreline and turning the former island of Darktide Roost into a massive floating outcrop, which would eventually become Netherwing Ledge. The Hand of Gul'dan, the volcano which Gul'dan created, dominates the center of the region, from which green lava imbued by Fel energy erupts constantly.

The region was the ancient home of the Shadowmoon clan, before the betrayal of Gul'dan.

The Alliance and Horde each have a settlement here, as do the Aldor and Scryers.

The valley contains one raid instance, the Black Temple (the ruins of the Temple of Karabor) and several elite areas.

Shadowmoon region prior to the destruction of Draenor. 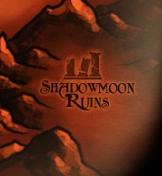 Shadowmoon region as it may have appeared in Warcraft III.
Add a image to this gallery

Sanctum of the Stars

Retrieved from "https://wowwiki.fandom.com/wiki/Shadowmoon_Valley?oldid=2840594"
Community content is available under CC-BY-SA unless otherwise noted.