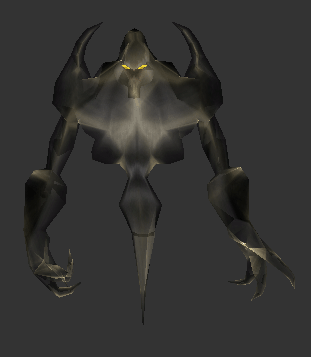 Were you looking for Shade of Aran, a boss in Karazhan?
Or maybe the Shade of Arugal?
For the Warcraft III unit, see Shade (Warcraft III).

Shades are disembodied spirits and are similar to ghosts in that they are the spectral remains of a once-living person. These often restless spirits are mostly found in the Plaguelands, other undead-infested areas, and the village surrounding the mysterious tower of Karazhan. Because they do not have a real body, some shades are immune to physical damage.

Those that spawn unattended tend to avoid living creatures and have weak combat skills. However, they have keen perception to see things with true sight and can be very loyal to those who befriend them.[1] (MG 120-121)

Shades who were created intentionally as opposed to forming out of happenstance were called forth from the depths of the sacrificial pits. These shades are vile, wraith-like creatures who exist only to serve their dark lord, The Lich King. The invisible shades are virtually undetectable by normal sight, making them ideal scouts and spies for the Scourge. Though they cannot attack the living, they are still considered valuable assets to the Lich King’s forces.[2] (W3Man 104) A shade is an invisible wraith capable of spying on the enemy, detectable only through magic.[2] (W3Man 44)

Shades are the restless spirits of those who never had a chance to "achieve greatness" in life. A vaporous gray mist clearly forms the skeletal body of this creature. Its vaguely humanoid body is translucent and leaves a misty trail as it glides silently about. Only the bright violet eyes, which burn with great intensity, look as though they have any substance. These utterly invisible, incorporeal creatures can see all things for what they truly are. Quiet and discrete, shades prefer to avoid living beings. They seem content to roam the land where they were spawned, but most seem also equally at ease among other undead. These intelligent creatures sometimes serve in undead armies as scouts or spies, reporting anything they see to their superiors. Once they enter service, shades almost invariably remain loyal to their superiors and their cause. Because of the shades’ unquestioning loyalty, many undead generals seek to employ them despite their lack of courage or fighting capabilities. Poor combatants, shades prefer to avoid fighting as much as possible. They would rather flee than face an enemy they cannot hope to defeat, but they also tend to retreat from creatures they could likely defeat. When forced into battle, they use their Spirit drain ability to hamper the living, but still seek to fly away at the first opportunity. Cornered shades fight to the death (but note that incorporeal creatures are notoriously hard to corner…).[1] (MG 120-121)

Shades are among the most powerful undead creatures created by the plague, second only to those massive powers formed through divine intervention or heroic activity. These creatures are fanatically loyal to Ner'zhul and are created from his most devout and capable followers. Only the truest patriots of the Cult of the Damned are worthy of this great honor. Even after death, their loyalty is absolute. They are unquestioned in their realm, and they are the greatest spy force Azeroth has ever seen. Together with their abilities of fighting and sorcery, shades are a potent force in Ner'zhul's legions of the Scourge.

Shades can move completely unnoticed. While operating under this ability, the shade is not noticed or thought of as unusual; it appears to be someone familiar and accepted to all those around it. Even the most unusual actions will seem “reasonable,” and the individuals around the shade rationalize away unusual actions or strange conversations.

Shades are created by a formal ritual of sacrifice, in which a single acolyte who has completely proven himself to Ner'zhul is brought over to the far side of death. The plague is allowed to enter his body, and powerful necromancers spend several days transforming the acolyte's pitiful shell into a devastating creature of undeath. This ritual occurs in a place known as the Sacrificial Pit, where the focused energies of the Lich King and his necromancers are at their most powerful.

A shade may communicate telepathically with any other shade in line-of-sight. This telepathy is difficult and requires concentration: the shade may not take any strenuous actions while performing this ability, though it may perform simple tasks or attempt to appear to be doing something other than speaking silently in its mind. Shades use this ability to keep contact with their fellows while on a spy mission; also, they use it to coordinate attacks against a more difficult opponent or to prepare ambushes against those unprepared for the assault.

A shade can be made unreasonably angry when faced with its own reflection (something not easy to produce) or when reminded of its time spent as a mortal. A shade considers itself to be reborn and attempts to forget its past existence - constant or poignant reminders of the past will infuriate a shade and cause it to attack without regard for its own safety.[3] (MoM 143-145)

Due to their invisibility, shades are employed by the Scourge as spies and scouts. They are created from the sacrifice of acolytes of the Cult of the Damned.

In World of Warcraft, they attack with shadow-based spells and melee attacks.

Retrieved from "https://wowwiki.fandom.com/wiki/Shade?oldid=2838907"
Community content is available under CC-BY-SA unless otherwise noted.