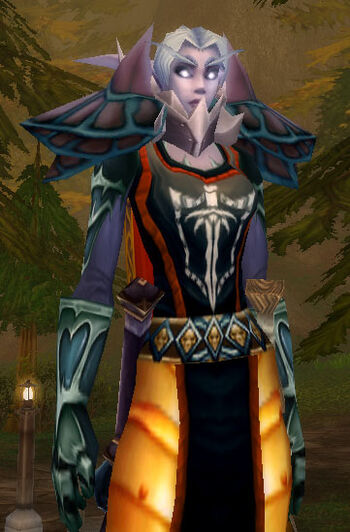 Born shortly before the war 20 years ago, (Warcraft III: Reign of Chaos) Faana's parents were killed during an attack. With no knowledge of her family, she grew up an orphan in Dolanaar. Considered an outcast by most, she grew strong and tough. Eventually, this lead her down the path of a warrior.

Faana started out like her kin, in a small grove with young creatures all around her. As she grew stronger, she learned much about the world, and even took to venturing into places she knew she shouldn't have. Doing this, however, often ended up with her learning a flightpath or two she would use much later on.

When she had about 16 seasons of training on her, she was invited to join the guild Masonic Order, which she accepted. Finding many people she could call "friend", she grew stronger, faster.

She took on the profession of Mining, as it would be a good way to get money. She also took on Engineering, which looked like fun. As she would learn much later, however, Blacksmithing would of been a better choice.

By the time she'd realized this, however, she was already so heavily committed to Engineering, that she had sunk a lot of money into aquiring the schematics for many items, including the SnowMaster 9000. If not for this, then she would give it up in a second.

Another thing she's learned, is that she's a pet-fanatic. Obessed with collecting small pets, she has been able to obtain at least 1 of almost every type. Certian ones, however, she knows she can never have. (Collector's Edition pets, Murky, ect...)

Halfway through her 57th season, The Dark Portal opened. A few quick quests, and she, like many before her, stepped through the portal, and into Outland.

Once she had reached her 70th Season, Faana turned towards issues surrounding her guildmates. Masonic Order was suffering and she did her best to try and help, but there were issues that they just couldn't solve. As such, Faana left Masonic Order, along with most of her friends, and formed a new guild.

Infinite Ascention was born through the ashes of Masonic. Many of the old members joined this new guild and Faana found herself as their leader.

She now focuses on taking care of her guildmates, helping out when she can, and getting ready to be able to help people with virtually any instance or run they might need. She is also working towards saving up for her Epic Flying Mount.

Retrieved from "https://wowwiki.fandom.com/wiki/Server:Steamwheedle_Cartel_US/Faana?oldid=761400"
Community content is available under CC-BY-SA unless otherwise noted.