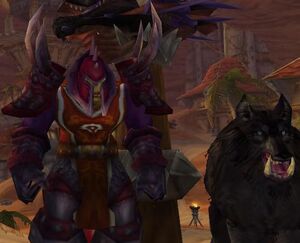 Discription
Kie'thoo ( Keith'oe ) is a young male adult orc. He is average for his weight and height.
His eyes are a redish-purple. His chin has a light beard and he keeps his long black hair braided.
His nails are well trimmed, by orcish standards kept sharp enough to use but not mistakenly harm.

Kie'thoo was born in the forrested mountains of Hillsbrad around the end of the orcish interment. His father was killed by humans early on when the orcs first arrived in the new world. His mother left alone and without aid of the Horde traveled pregnant with her unborn son into the hills finding a small dry cave. After making a soft place for her self she settled in and weeks later gave birth to her son.

Kie'thoo almost never left his mothers side. After being nursed by his mother as a baby, Grun'ilda carried her son on her back in a pouch as she would hunt and capture small game around her den. As Kie'thoo grew she taught her son how to clean, skin, and cook the small creatures. Soon Kie'thoo was large enough that Grun'ilda let him come along and showed him how to track game, live off nature, and to survive. Lessons she knew he would need to know in this world.

Kie'thoo grew strong and was a fast learner from his mother's teachings. Soon he was brining back food and nature built tools by his self. But Grun'ilda was not sure killing small animals and wild birds was enough of a test. She would test him the way she and her mate and other orc hunters had been tested. As Kie'thoo slept in the middle of the night Grun'ilda shouted for Kie'thoo to awaken and tossed cold water on to him. He awoke dazed and cold and Grun'ilda handed him a crude spear and a dagger and ordered him to go into the night and bring back the slain body of a great predator from the woods, and if he could not find one or kill such a beast Not to Return! Kie'thoo was shocked but obeyed and went out looking for such a creature. As he disappeared into the night Grun'ilda silently wondered if she had sent her only son to his death.

Kie'thoo used all he had learned from his mother's teachings and soon found the tracks of a large predator, he was somewhat sure it was a wolf from what his mother had described of their tracks. He had never seen one before but his mother had told him that Wolves were once great fierce beasts the orcs once used as friends and hunted as dangerous foes. He tracked the wolf into the hours of night and soon found a small dark den. Inside he could hear the sound of teeth ripping into flesh. Kie'thoo tossed a rock into the den and watched as it skipped into the darkness. Soon a low growl came from the shadows and two red eyes appeared slowly a large form came from the den, a large black wolf its bloodied red fangs dripping as it growled looking for an intruder. Kie'thoo sprang out before the beast and let out a great battle cry before charging at the beast, it did the same snarling as the two closed on each other.

Grun'ilda sat in her den looking out into the moonlit forest for any signs of her son. She worried she had not trained him enough, that he was still to young, that she had sent her only son to his end. She tried to hold back her tears when suddenly a great figure appeared from the woods and came to the front of her den. She knew it was an orc from it's shape but the dim fire in her cave against the darkness outside shadowed his face. The orc was wearing a large wolf skin cloak, around his neck was a necklece with several large bloodied fangs, and he held a spear in one hand and a small creature in the other. She watched as the figure moved closer and into the light. Her son was no longer a child, but a proud orc warrior.

After slaying the great wolf, Kie'thoo had found a small pup still inside the den. Kie'thoo knew it would not last alone and decided it would be best to take it with him. His mother reminded him that the orcs had always had a great bond with Wolves from their homeworld. She also explained that his pup was a type of wolf known to orcs as a Worg the breed of Wolves from there. Kie'thoo fed and brought the young pup with him and soon he had named the worg Mugala after the huntress who had taught his mother. A strong bond formed between the pet and master and now they are inseparable.

Just before the final battle at Durnholde Keep, Kie'thoo and his mother joined Thrall's new horde having become the new Warchief. After the battle was over they went with their people to the shores of what would become the orcs new home in Durotar. Grun'ilda started to notice her son showing an interest in the females of his race and explained to him about Female Orcs.

Kie'thoo soon began to take a large interest in one particular girl. A blue eyed and quiet Orc named Tal'gha. She had no family other then a small pig that followed her everywhere, she even seemed to talk to it more then any other people.

But Kie'thoo knew that his destiny was to be with Tal'gha!

Retrieved from "https://wowwiki.fandom.com/wiki/Server:Moon_Guard_US/Kiethoo?oldid=2850584"
Community content is available under CC-BY-SA unless otherwise noted.