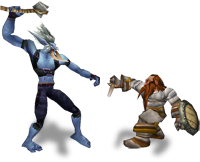 According to the official realm status page, the realm is healthy. Our realm has been well populated since it was opened, and has in relation to that also had a history of queues (sometimes massive) during peak hours.

The namesake for our realm are the Frostmane tribe of Ice trolls that inhabit Dun Morogh and constantly fight a guerrilla war against the dwarves.

Choose a section to view:

Info: Guild ranking is based on the following

Note: Ulduar H = Hard Modes and Algalon is counted as a hard mode and not normal boss as he requires multiple hard mode kills to get to.

Trial of the Grand Crusader

Select the season you wish to view:

Retrieved from "https://wowwiki.fandom.com/wiki/Server:Frostmane_Europe?oldid=2464045"
Community content is available under CC-BY-SA unless otherwise noted.