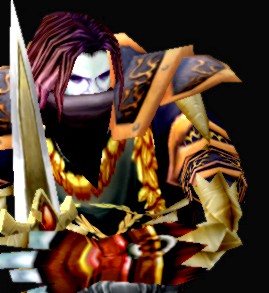 Undead Rogue on the Feathermoon US Roleplaying Server

Born to a Lordaerian crime family before the Second War, Aethan Heroditus Endymion von Dresn (AKA Dresner), was groomed by his father to take over the "family business".

The Third War ended these plans, as the entire family was wiped out in the Fall of Stratholme. Aethan, who stood with the defenders to the last, was spitefully raised by the necromancers of the Lich King, and marched mindlessly beneath the banner of Arthas in the final destruction of Lordaeron.

When Sylvanus rebelled against the Lich King after the defeat of the Legion at Hyjal, her emissaries rescued Dresner from the clutches of his Necromantic overlord and returned to him his sentience. He awoke in Tirisfal Glades, both aware of and accepting his crimes under the yoke of the Scourge. To this day, he is unapologetic for his role in the Lich King's army... to his reckoning, it served as a "necessary cleansing" which all stagnant systems require from time to time.

The situation in the new Forsaken society, however, quickly stagnated in its own right. Dresner saw many of the "liberated dead", aimless in their new immortal lives, falling into another mindless worship... this time of the Dark Lady. Corruption began to rear its ugly head once again. Refusing to fall back into line and be dominated for a second time, Dresner pulled up stakes and cast his lot over the sea to Durotar.

There, he met and was accepted by a whole new society. The Orcs, Tauren, and Trolls were bravely trying to carve out their place in a post-Hyjal world. Dresner saw the opportunity to get in on the ground floor of a new world order. Ingratiating himself with the authorities of Orgrimmar, he has since stood behind the sigil of Warchief Thrall.

Dresner is, to say the least, a complex character.

While he can be friendly, outgoing, sincere, and welcoming, he is also not above the most diabolical and gratuitous of gleeful butchery and torture. He assigns value to life, and respects all things as part of the intricate web of existence, but also has no problem with casting this respect for life completely aside when facing an adversary.

In confrontational situations, Dresner is completely devoid of mercy, or even, indeed, feeling. He doesn't get angry, he doesn't get vengeful, he doesn't wisecrack or gloat. He does what is necessary to perform a task, then once that task is accomplished (by any means, however foul), he has no guilt or shame about performing it.

He has, of late, taken to being flippant about this ability to disassociate himself from violence. He seems to see the pain and suffering he causes almost from a third-person perspective, as if he is watching himself perform these hideous acts from outside of himself. This has caused him to become comfortable with being light-hearted, and even jesting, about the agony he inflicts. After the fact, of course.

To those he takes a liking to, however, Dresner is sociable and jovial. To those he has welcomed into his close circle, he is unceasingly loyal and unconditionally trusting, even tender. This just makes his psychology all the more disturbing for them, as they watch their dear companion degenerate, at the drop of a pin, into a cold, calculating monster and back.

Of late, Dresner has begun to develop a disturbing addiction to living flesh, particularly that of gnomes. It is one of the few aspects of his personality which disturbs him... for this craving, unlike his murderous instinct, sees no differentiation between friend and foe.

Archfiend (Founding Member) of Something Wicked
Revered Blood Guard of Warchief Thrall and the People of Orgrimmar
Friend and Decorated Hero of the Frostwolf Clan
Honoured Ally of the Steamwheedle Cartel; Booty Bay, Ratchet and Gadgetzan Chapters
Eternal Member of the most Loyal Order of Lordaerian Masons
Friend to the Timbermaw Tribe

The following items can be custom crafted by Dresner, for any Horde players on the Feathermoon server. Arrangements are also available to supply these items to Alliance players... contact Flaidd Alliance-side for details. Enchants can only be supplied cross-faction in conjunction with a crafted item.

Please note that a base surcharge of 10% will be added to item costs cross-faction.

Prices listed are without customer-supplied materials. Should the customer supply some or all of the materials, price will be adjusted accordingly.

Retrieved from "https://wowwiki.fandom.com/wiki/Server:Feathermoon_US/Dresner?oldid=1155250"
Community content is available under CC-BY-SA unless otherwise noted.