Nicknames: Little one (by Lofn and Vajraven Sorenstam)

A player character who may be found on the Feathermoon Role Playing server. 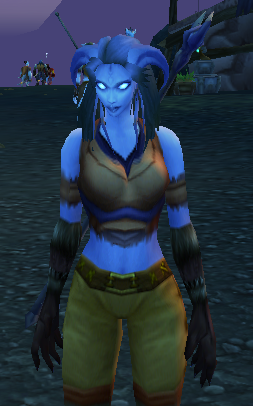 Astadaa Kirsantii was one of the many Draenei born aboard the Tempest Keep after the Orcish purge of Draenor. Growing up, she had heard and was fascinated by the tales of the powerful beasts of the Exiles' Refuge. By her adolescent years, she had a very strong interest in this "Nature" that she had never experienced for herself, and an equally strong interest in healing and helping other Draenei. By the end of the Tempest Keep's journey, she was an assistant and helper in one of the dimension ship's many medical bays. While nowhere near the level of training needed to be a healer, she was enthusiastic about her duties, and competent at them.

When off-duty, Astadaa was often seen with her close friends and her younger sister, traveling about the public areas of the Keep. The bazaar within the Exodar was one of her favorite places, and she possessed a varied and colorful wardrobe appropriate to a girl of her age.

Then came the fateful day of the ship's crash. The Exodar ejected away from the keep as blood elves invaded. Destabilized, the Exodar plummeted toward Azeroth and crashed horrifically. Astadaa was gravely injured, broken and dying. But her tale was not yet finished, she was given a new lease on life by the spirits of the elements. Revived by the spirits and charged with their powers, she became a Shaman, and so began her life on Azeroth. She quickly found that her body had been changed: While before she had been a youthful girl, on the edge of adulthood but not there yet, her new form was that of an adult woman, youthful still, but older. She knew she could never go back to her carefree life, so with determined heart, she stepped forward into her new world...

New Friends, New Family - In recent days, after the crash and her rebirth as a Shaman, Astadaa was drawn by the spirits to Stormwind City, where she met Farseer Umbrua, and her friends, the Warmistress Constance Denselde and her lover, the Archmage Cleodora Silvestri. Through them, she met and was inducted into the Clan of the Silver Dragon, Shardracona. Her Common is poor, but improving thanks to Cleo's and Connie's tutelage. Astadaa is particularly fascinated by gnomes like Widjit Kitclick-Winchmeyer and Ashyrn Gearblade, who are remarkably brash, outgoing and adventurous for such little beings! She is often seen with two other Draenei, her fellow Shaman Aleraa and the paladin Anita conDoin. Especially Anita, for whom she is rapidly developing feelings that go far beyond friendship and comraderie. Persis Anarane'Annare Denselde is among her dearest companions, her teacher in the ways of close combat and the wisdom of steel, and a partner in mischief and fun to rival any other.

Very quickly, Astadaa and Anita found themselves deeply enmeshed in a love that grows deeper every day, and were wed by Xanthalia Ishaiya before the Light and the Spirits, with Persis and Siji as their Maids of Honor.

As Seen By Others

This section is reserved for those who wish to add their thoughts about this character.

With the arrival of the Draenei mothership to Azreoth, Persis has gained another good and close friend with Astadaa Kirsantii. Persis knows that Astadaa wishes to become the best possible Shaman that she can. To that effect, Astadaa has become Persis's first devoted Thero'shan. Although Shaman are wielders of Magiks, Persis will teach Astadaa all she knows about wielding one and two handed axes and maces, as well as a source of advice, aid and answers to questions, concerns and danger. Both Astadaa and Persis get along very well, and are on occasion the cause of mischief and fun. However, when it comes to assisting Astadaa with her training, both Thero'shan and Shan'do are totally focussed and respectful of each other.

One of Persis's greatest honors was being Maid of Honor for Astadaa, for her Union to Anita conDoin, in the Exodar.

"The Light is my path, and the Spirits are my guides upon it."

Although Astadaa is aided in her fighting by the spirits of the elements and the power of her totems, she is a fearsome hammer fighter who excels in both ranged and close combat. When fighting blood elves, she becomes more aggressive than usual, and exhibits little of the honor common to her people; she will trick them, sneak up on them, attack first with her strongest spells and fight dirty to dispatch her enemies.

Farseer Astadaa's parents were killed in the crash of the Exodar. She is now a member of Shardracona, and is beginning to settle in among them. Astadaa has a personal anger toward blood elves, who caused the death of her parents, and is bewildered at the Horde which would allow such power-hungry creatures into their midst. She is fascinated by the exotic peoples of the Alliance. Despite her respect and honor for the half-elven Warmistress, it took her some time to get over Constance's resemblance to a high elf/blood elf.

Saitii is Astadaa's younger sister; barely into her early adolescence. She is named after her mother, who sacrificed her own life in the crash to save her young daughter. Saitii is now in the care of the priests, and shows significant talent along that path herself. Being younger than Astadaa, Saitii's language skills in Common are advancing considerably more quickly, and her speech is beginning to adopt a Stormwind accent.

Astadaa's appearance is based on the web character Astaroth, created by the users of Futaba Channel, whose appearance is strongly reminiscent of the Draenei with blue skin, pointy ears and horns. Her personality is (loosely) based on Hawkgirl (Shayera Hol), the powerful alien warrior of the animated Justice League.

Retrieved from "https://wowwiki.fandom.com/wiki/Server:Feathermoon_US/Astadaa?oldid=887639"
Community content is available under CC-BY-SA unless otherwise noted.